Starving on the Greyhound…

From when I wrote last time, the plane continued onwards, passing just south of Greenland before beginning its descent just a little after Montreal. I don't know what's gotten into Air Canada but they were in some monster rush to get us down on time, and that's exactly what happened – about an hour earlier than scheduled, we were on the ground and in my case at least, planning what to say to immigration to pacify being here twice in the space of 6 months. It went pretty well and in no time at all I was standing in The Beer Store selecting a crate that would tie us through until I left Ottawa! As always, Kirk was a fantastic host and got the pizza in before I even knew I was hungry – on a different note, he's releasing a CD and you can find him by Clicking Here! 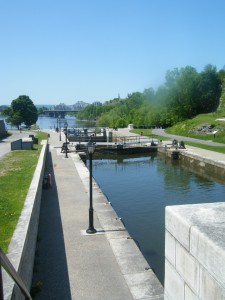 It always amazes me how different Ottawa looks in winter and then in summer. It's such a small place but really pretty beautiful – certainly, as capital cities go, I don't know if it really comes across as one. It seems more like a town just situated on a major road to somewhere else. But it's pretty nice and there always seems to be something new to see; this time, it was the locks. We wandered around the buildings of parliament and down some steps and it was amazing; within 5 minutes, we were standing down at the locks of the Rideau Canal, looking out to the ‘Northside' (Hull). Aside from that, there was also something new to drink and just another 10 minutes on from that, we were sitting in Blue Cactus having a ‘Cactus' sized beverage, which was pretty impressive! Oh yes!

The rest of the time in Ottawa was taken up alternating between more sightseeing and going out of a night – we went and saw an incredibly bad film, ‘Troll 2' on Saturday night. Otherwise though, Ottawa seems much the same as it always does – so crime seems to be maybe a little up, but the buses are still every bit as complicated and tourist-unfriendly as I always found them, while still being ruthlessly efficient and in plentiful supply – just look at the picture to the lower right! Monday morning then saw me heading to the bus stop (after I collected my laundry en-route!) and making a decision that would come back to plague me in a major way later on. I grabbed a slice of pizza, coke and pack of crisps for $5 about an hour before the bus ride and feeling a bit full, elected not to buy any more food for the bus journey. Poor choice. I got on the bus and got comfy for the 5 hour journey down to Toronto. As we sped along, I began to feel a tiny bit hungry after the first hour and a half, pushing on two hours. Not to worry, it wasn't too bad. 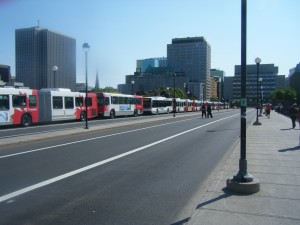 No problems catching a bus in Ottawa...

However, at some point in the journey we made a rest stop, during which everyone stormed off the bus, purchased some highly overpriced (and when I say highly overpriced, I mean too expensive for me to be able to buy) food and got back on. It looked delicious. It smelled delicious. It probably tasted delicious. I, on the other hand, had half a packet of crisps to last the next 2.5 hours down to Toronto. It would be safe to say that by the time I reached here, I was absolutely starving. I was actually starting to debate whether the carpet they upholster coach seats with had any nutritional properties. I got off the bus and straight into the arms of the nearest homeless man who was stopping everyone one by one off the bus and asking if they'd any money they'd like to hand over. I actually said no sorry, but in hindsight should have just explained that a) I'd just gone 7 hours without food, quite an amazing feat in my case and b) the others definitely had lots of money they could give away because they'd all been able to afford those sandwiches at the rest stop.

So here I am in Toronto! I'm leaving for NYC tomorrow but hopefully during that flight will get time to write about Toronto and how it's been going (it's been very good so far though, thanks for asking) and will post that when I get to New York!

In the meantime, it's time to go look for more $5 pizza…