Sprechen Sie Deutsch? No, Not Really…

After a hard week of good work in Frankfurt, which saw us making regular commutes to the internet cafÃ© owing to the complete lack thereof in our new apartment, it was time to head back up north to Anna’s family to spend the weekend in relative peace and tranquillity. While I love our new apartment (relatively speaking), it comes equipped with no blinds to really speak of which can lead to a horrible dreariness at 5am (a bit like coming out of Coppers in summer time) when you wake up and realise it’s bright and that time must be limited for the remainder of the sleep. Also, our room is sited on the corner of the building, which is just beside a major traffic intersection, which itself is just also beside the Frankfurt South railway station. So, from late into the night and beginning again with the first lark of the morning, the natural sounds of the Intercity Express, the overly-regular VGF trams and a heap of traffic are to be heard. As I say though, the apartment otherwise couldn’t be better and already we’ve gotten quite used to being soothed to sleep by the noise of the No. 16 to Ginnheim. 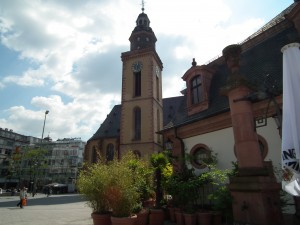 I also begun an ‘intesivkurs’ in the German language. For anyone completely devoid of any imagination, that translated to ‘intensive course’ (see, it wasn’t that hard?). I wasn’t exactly sure what to expect, but buoyed by my mother telling me at Easter that I was always ‘very good’ at learning languages, I felt ready for the challenge. First things first, the class is a serious mixed bag – you’d think with the recession and all that, there might be a few fellow Europeans trying to bail into a country that’s still somehow afloat, like myself for example. Well no, there isn’t. I’m one of only two Europeans in the class pretty much. But secondly, and more troubling, neither of our teachers speaks a single word of English – in fact, it seems they’d rather watch you hit the iceberg and sink deep into the ocean before helping you out when you clearly don’t know what’s being asked. However, this version of learning, which seems to rely heavily on causing grave embarrassment to whoever hasn’t been paying sufficient attention seems to work surprisingly well. 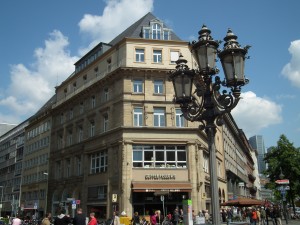 Anyone for coffee, fellows?!

Which reminded me after a couple of days what it was about learning a language that always seemed to make me do quite well; I don’t know why, but I find speaking another language and making mistakes in it significantly more embarrassing than say, burning my hand on a Bunsen burner in science class for example, or not knowing the meaning of that complicated 4ac/2a + 3…whatever it was maths equation. As a result, I seem to put in a very serious effort into studying new languages in order to try and save the embarrassment of not knowing. It took me back to Leaving Certificate year in secondary school, when my Irish was really quite poor for the standard of the class I was in (which was ‘Honours Level’) and yet somehow, when called upon, I was always somehow quite able to articulate my opinion on a whole raft of issues of national importance, such as the economy, or politics, or why Irish needed to be a recognised language in the EU. I don’t think, in hindsight, I actually could – it was more the adrenalin of not wanting to be terribly obviously out of the place in the class that had me suddenly discussing all sorts of offshore financial deals involving Charles Haughey in the 1980’s, in Irish, as quickly as possible lest someone notice a few vital words were missing here and there.

So that’s been things lately. I have of course also been seeking out prospective jobs, and have been trying to line up things with some success. In the meantime of course, there’s always the ‘intensive book’ to go back to and learn as rapidly and intensely as possible, lest I finally be caught out as a language fraud after all these years…