Re-Uniting with an Old Friend… 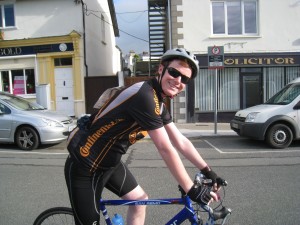 And that was the last time I was seen in this get-up...

It seems strange, but only this time last year, I took part in the ‘Wicklow 200’, an event that puts your love of cycling, or insanity, to the test. You get to cycle all around the Wicklow countryside for the afternoon for a distance of 200 kilometres, wondering why it’s taking you 3 hours to go between two towns that you know to be only 20 minutes drive apart, only to realise that the route deliberately takes you to the foot of a mountain, which has to be ascended before reaching said town. It sounds painful (and it is), but it was a lot of fun and hopefully, having done the event in 2008 and 2010, I might be so lucky, conditions permitting, to take part in 2012 again and keep the 2-year thing up. The unfortunate thing is though, after the event, circumstances nearly always get in the way and I end up giving up the cycling again for a number of months and then having incredible difficulty getting going again – in 2008, I got a full-time job starting the day after the event and didn’t have the time from there on to do any cycling, even to the local shop. Then, in 2010, the same thing happened, but this time, I also received word that I would be going to Kuala Lumpur from the end of August, leaving no time to get in any cycling beforehand.

The result; I haven’t actually been on my racing bike in nearly a year. And since I took it with me to Germany from Ireland, vowing never to leave it alone for such a lengthy period ever again, I decided that in spite of the regularity of the trams passing up and down our street, the fact that they drive on the right over here or the unbearable heat of late, a proper cycle was well overdue.

The perfect test for the avid beginner...

First things first – you know when you watch the Tour de France and think to yourself, wow, the saddles are actually higher than any other part of the bike, that must be uncomfortable? Well, you obviously get used to it, and I obviously did – but now I’m quite unused to it, and the sitting with my bum higher than any other part of my body feels altogether very unusual, if a little nerve-wracking. Secondly, I have pedals (and shoes) that lock together during the journey – which, unlike other cyclists I’ve read about, I’ve loved ever since I bought. But somehow, after a year of walking the streets freely or cycling a bike (for a very short distance) with normal pedals, having my feet literally stuck to the pedal, especially when the traffic behind me is a 50-ton tram in a race to get to Ginnheim, wherever that is, also feels very unusual. Last but not least, the steering. Ok, so this sounds more like a gripe than anything – but I remember using Anna’s fathers’ bike (more like a mountain/city bike) some time ago and thinking to myself that the steering was quite…unresponsive. That’s not to say it doesn’t work, it’s just you have to quite actively turn the bike with the handlebars around a corner. On mine, which I’d forgotten about, you don’t so much turn the bike as tilt and lean tightly into corners, using the handlebars more like a rollercoaster safety bar to hold on to.

The reason is simple – which I presume is down to the racing bike’s tires; if you try and turn the racing bike around a corner with the handlebars like you’re turning an articulated truck around a set of traffic lights, then the bike wobbles uncomfortably as the tiny wheel surface struggles to grip onto the road and turns so quickly that you’d almost certainly end up chewing the steel out of a nearby lamppost. 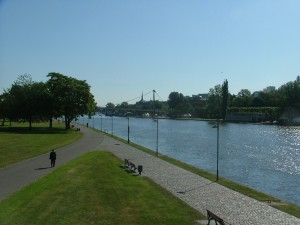 So, I set off down the road, taking care to try and stay ahead of the tram, while hoping that any ‘polizei’ nearby wouldn’t have noticed that I didn’t actually in fact have any front or rear lights. The big giveaway of how beginners-like my cycling has become came at every traffic junction down the street when an elderly man on a bike that looked like it was set to cave in to metal fatigue kept managing to get underway and about 20 meters down the road before I could get going, clip my shoes back into the pedals, stop wobbling and steer straight. But regardless, I persevered, cycling all the way down to the River Main, taking a right and hitting the ‘R3 Radweg’ which I spent most of the journey hoping it meant it was a bike path called the ‘R3’. The journey took me out of Frankfurt, along past a river lock, out past a funfair and more or less straight into beautiful, scenic countryside. I spent the best part of 45 minutes cycling on the way out, stopping for 5 minutes at a park where the cycle lane split in two (and I decided it best rather than take one option which could possibly lead me somewhere I didn’t want to be going, just to take a break then and there) and 50 minutes back. The scenery, even though it was only a short journey, was really great and I’ve no doubt that I’ll be going back soon to continue past the junction and see what’s further on.

But while it may sound like I’ve lost all familiarity with the bike, we all know a bad workman blames his tools and all that, and there’s one thing the bike simply can’t be held responsible for, which also explains the longer time returning to Frankfurt than cycling from it – I’m afraid in all the time away from cycling, my ability to cycle 200km’s (even 50km’s) in a day has diminished significantly and me and the bike are going to have to seriously get re-acquainted again, quickly, otherwise it could soon be the bike that looks set to cave in to metal fatigue.