A Weekend in Munich – Part 2 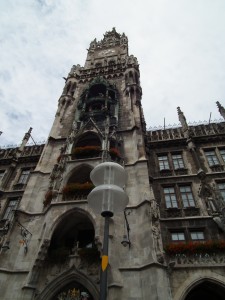 The next morning, as I said in my last blog post, we were sort of tricked by Munich. We got up, the sun was shining – we got dressed and ready to go out, the sun was all but gone. Our hotel, which had previously seemed to be the busiest hotel in all of Europe was even busier if that was possible, and there was a new all-time first, a wait of 15 minutes to just check-out.

Back out onto the streets of Munich once again, we begun, a little bit more sensibly than before, by immediately finding the nearest bakery and getting the breakfast in, without the tour that was needed the day before. Next up, the opportunity to finish off what had been missed the previous day – we started out by wandering through the streets once again, where of course everything was irritatingly shut, as it always in on Sundays in Germany, before finding our way back to the English Garden, just as the rain settled in. The English Garden, and the buildings leading up to it, are something that really has to be seen; in a particular order. We wandered along, eventually finding our way into the main part of the gardens. 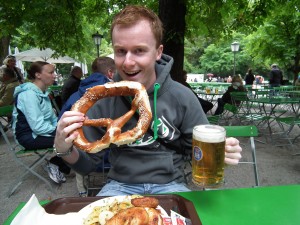 By now, it was lashing, and although I strongly contemplated hiding under a building for the rest of the afternoon, we carried on further into the park. Although the park has pathways that meander on seemingly endlessly, ours in particular eventually converged with a whole bunch of other paths somewhere in the middle of the park, around which there was a number of traditional eateries. Even though breakfast had been scarcely two hours previous, we decided to take in the last of the delicious Bavarian food and went ahead with some chicken, roast potatoes, a beer and a giant pretzel to finish things off.

Barely able to move, we decided to leave the park as fast as possible, lest I find any more places to eat and drink. The rest of the day went a little quicker than the previous day – it was quite cold out (something that was a permanent fixture for our whole stay) so we eventually decided to try and warm up by going into a museum. Now, I’m not normally a museum buff by any stretch anyway, but I kid you not, this was by far the most mind-numbing museum I’ve ever been to in my whole life. I really mean it. It was extremely boring. We eventually picked up speed walking around not because how dull it was, but because the repetition throughout, combined with the heat of the place and the availability of benches in some dark, quiet rooms, meant that the incentive to sit down and have a nap was at an all-time high. 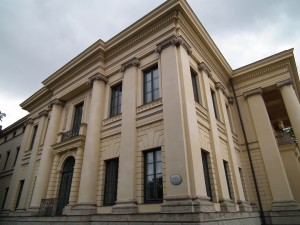 So, we had to move on. We saw as much of the museum as we could possibly take, and quickly went back out into the fresh air, determined to cool ourselves back to life once again.

In the end, with time drawing to a close in Munich, we wandered back along some of the routes we’d covered before, eventually winding up at some tunnel full of graffiti. I’m not really a fan of graffiti art – I don’t really get it to be honest, but this stuff was actually very interesting. I can only imagine the city council let serious graffiti artists in to do it, because I find it very hard to believe anyone could do this kind of stuff without having time on their side. Remember the Christmas windows in Brown Thomas when you were a kid? Well imagine a more fanciful and elaborate graffiti version of that kind of display and you have the idea. 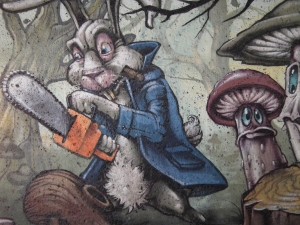 No joke, it seemed to cover everything from astronauts on the moon, to the chainsaw-wielding rabbit (in the picture on this page), and pretty much everything in between. It was, I realised, the first time I’d actually been so impressed by graffiti in a subway that it actually made me feel safe, rather than unsafe.

That said, our time came to a close and what I learned most of all, which is a good complaint, is that I simply needed more time to really enjoy Munich to its best, to sample more of the beer, taste more of the great food and against all odds, see more graffiti.

Next time Munich, I promise.