It occurred to me recently that there are so many options in Frankfurt, which I’ve never seen before, that involve you basically doing the work yourself. 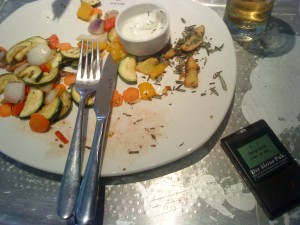 The first one came last week, after our trip to check out Mainz, when Anna suggested we hit up some restaurant she’d been to the previous week with some of her work colleagues. The idea is a little bit like the Superquinn self-scanning thing; you do the work that other people normally do and you wind up with the same thing as everyone else. In this case, when you enter the restaurant (holyfields), they give you a small ‘puk’ as they like to call it, that you use as your personal waiter. To order food, you order from a touchscreen menu and then hold your ‘puk’ up to it, so it knows who exactly wants the food.

Then, when your food is ready, the puk starts flashing and blinking and jumping up and down with such vigour that you might expect it to hop clean off the table any second. It’s a sight worth seeing. Then, instead of someone bringing the food to you, you have to actually get up yourself and fetch it from the counter, where they again use the puk to be sure that it was really you who ordered it.

Before you consider your thoughts on having no interaction with a waiter in a restaurant, the restaurant in question is in the German version of receivership, so that should tell you how the whole thing has worked out.

Then, the next day, we headed over to one of my favourite areas of Frankfurt, Bornheim Mitte to catch a couple of drinks in the appropriately named ‘Irish Pub’, have some food and catch an English-language film at the Berger Kino, a venue which I can’t seem to speak highly enough of these days. While we were there, we saw another unusual object – a self-service library. 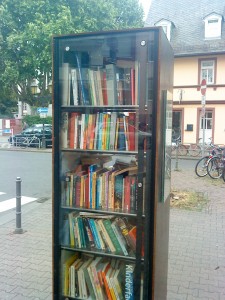 I know this one’s a bit harder to grasp, since libraries are inherently self-service to a certain extent, but I kid you not, this is literally a glass cupboard placed in the middle of a junction. You go up, open the door, find a book you like the look of, take it, and walk away. If you wanted, and had the suitable weaponry, you could probably destroy the whole thing in a matter of seconds, but somehow, and this almost puzzled me, it seems to work. While I was there for example, a German man found it hilarious how I couldn’t seem to break open glass on the other side (which wasn’t actually a door) – but the important thing is, he himself was using it seriously as a library.

Anyway, in other news, there almost certainly won’t be any blogs for a couple of days as we’re heading to Munich to check it out for the weekend, so keep an eye out early next week for a report on how that went.

In the meantime, I hope Bornheim’s citizens are prepared for an influx of used books – let’s just hope they’ve all got a good grasp of the English language!