Since our trip to Munich, no other opportunity to escape Frankfurt for a weekend has presented itself, and so we’ve been instead trying to come up with things to do for a weekend in Frankfurt. It’s not that there aren’t options – it’s just that a lot of the options seem pretty much the same. Anything that has ‘market’ in the title is more or less guaranteed to be a bunch of food trucks, with random drink stalls dotted throughout. Which is fun the first couple of times, but gets old pretty quickly. 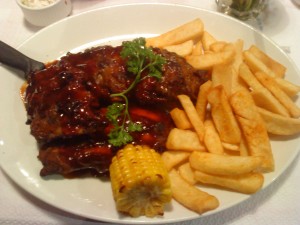 In other news, a restaurant I wrote about a couple of weeks ago – Holyfields – has now shut down completely, so that’s no longer a runner at all. In its absence however, we tried out the Chicago Meatpackers restaurant a few weeks ago. The idea is pretty much the same as every US-themed restaurant the world over. They serve a lot of meaty barbecue-flavoured food, at a not-cheap price, along with plenty of beers, all while you sit in a place peppered with American football team posters and baseball team flags. Whatever about the interior dÃ©cor, the place itself had some of the most delicious food I’ve had since I arrived here. Sure, the price wasn’t exactly bargain basement, but the ribs were delicious (although, I’d have liked a bowl or something to wash my hands with afterwards, other than using 20 napkins) and the mojito wasn’t half bad either. After that, we wandered along towards our home, coming along an impromptu outdoor cinema that had been set up along the main bridge between the side of the city where our apartment is, and the rest of Frankfurt.

Another day, we reckoned with nothing to do for the afternoon, that the Museum for Communication, which is only up the road from our apartment, had to be worth a try – after all, in my eyes anyway, the fact that it had some sort of giant robot sitting on top of a statue of a horse out the front must be a sign of quality!

The nice thing about museums in Frankfurt too, if you’re not used to it, is that they’re really quite inexpensive. In Dublin, museums range from mediocre to good, but the one constant is that they’re not the most inexpensive thing to do for the afternoon. In Frankfurt meanwhile, they may also be anything from mediocre onwards, but at least you don’t feel ripped off afterwards, no matter what happens. The museum for communication was around â‚¬5 per person. 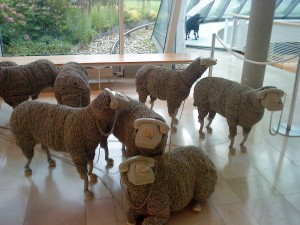 The Stuff of Nightmares.

The first exhibit, which you can skip through quite quickly if you’re not up on German politicians, is a sort of digitally-manipulated gallery of various German political and social celebrities. The main part of the museum, which was back downstairs it turned out, had exhibits which ranged from being interesting to downright bizarre. The most obvious of these was an exhibition on the ground floor, in which a bunch of sheep had been sculpted from telephone cables, with the telephone unit itself acting as their heads. Certainly, I can imagine this being the stuff of nightmares.

Moving along however, the museum kicked off with a timeline of telephones down through the ages, telephone exchanges, followed by a whole section devoted to the postal service. Next up, we moved along into an area that seemed to herald the development of the personal computer and the internet, beginning with a hideous looking telephone box that showed some sort of antiquated teletext, which apparently was the first sign of the internet for many Germans. Given that we hardly ever spend any time in museums (with a ‘good’ museum being an hour at most), I was certainly very impressed by what was on offer – especially since I didn’t really know what to expect from something with a neon-lit robot acting as the entrance attraction (I just presumed it must be good). 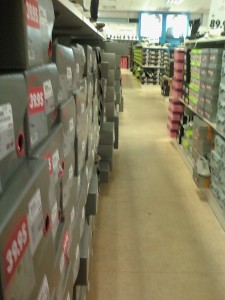 To cap off our recent weekend experiences, we decided to take the train out to a big out-of-town shopping centre called ‘Nordwestzentrum’. Don’t get me wrong, I had the fear long before we even got on the train that the whole place would be a huge German version of Dundrum Shopping Centre, but it wasn’t – it was much, much worse. To start with, temperatures on the day in question had climbed to a high of 37 degrees and the shopping centre not only badly lacked air conditioning, it was also covered in glass and it felt like we were stomping around a greenhouse in the midday sun, rather than a shopping centre. In actual fact, I’m pretty sure I drank more water in that shopping centre for the one hour we were there, than I did the whole time we were trekking through the Penang National Park in Malaysia. It was sweltering hot, and it otherwise had all the hallmarks of what I hate about Dundrum shopping centre – not only were there ourselves, ready to pass out from the unbearable heat, there was also crowds of German teenagers, swarming through the place, evidently looking for some way to pass the time.

There was also a ‘Primark’, in which throngs of people swarmed through the place like angry fans leaving a football match. Clothes hangers lined the ground, everyone was in everyone’s way and then, as we neared the exit, we could already feel the heat again of the shopping centre. As I say, we lasted an hour before we couldn’t possibly take any more. Nordwestzentrum, never again.

In the meantime, it’s back to the drawing board for how to spend a Frankfurt weekend; I just know shopping centres will never be on that board again. All suggestions welcome.