The bank holiday weekend here in Germany saw us travel north up to Hannover, to visit Anna’s relatives and also to see the many sights of Hannover – since we were seriously rushed the last time we stayed. Since we were staying with family this time, there was no need for us to chance our arm again with any of the many hotels in Hannover. 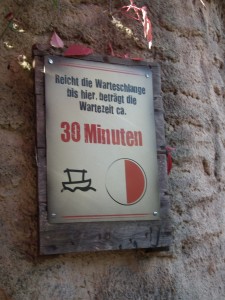 Regarding what exactly to do while in Hannover, the word on the strasse holds that Hannover Zoo is pretty much the top attraction. If you’re in the area and thinking of visiting, the first thing is, it’s â‚¬23 per adult – so you’ll definitely want to pack some food and drink, and whatever else you might need for the trip. The second thing is, with the weather strangely delightful for the first day of October, the place was absolutely packed by midday. Seriously – I mean Disneyland packed. Anyway, not ones to let that put us off, we carried on inside and begun our tour. The zoo, as they go, is gigantic and more like a theme park than a zoo, with the area split up into separate lands and with each land named or themed after a certain geographical place. The first area is themed after a sort of African safari adventure (it seems). You can walk around if you like, but with the heat slowly baking me, we retreated to the area’s star attraction – a ‘boot’ tour (boat) around the entire section of the park, again, all feeling a little like Disneyland. 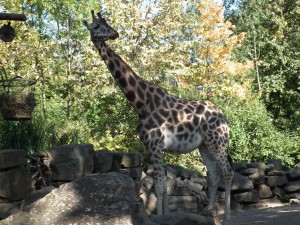 Giraffe comes out to visit...

Needless to say, on such a warm day we weren’t the only ones who wanted to try and stay close to the water, and we were joined by another hundred people in the queue, all moving slowly towards the attraction like a bunch of overheated zombies. The boat ride itself was pretty slow-paced, allowing plenty of time for me to start a staring competition with the ducks along the stream (and for them to win), and allowed plenty of opportunity for up-close and personals with the rhinos, giraffes, zebras and many other animals along the route – many of which were unfortunately taking an afternoon nap and couldn’t have cared less if a 747 flew past them, let alone a boat full of picture-taking tourists. For me at least, the most comical moment came about Â¾ of the way through the boat ride, when you approach a sign advising you to look excited for an on-ride camera. In actual fact, due to the lazy half-hearted speed of the boat, you’ve already completely forgotten about the sign by the time the flash goes off and your picture is taken. Even though the boat is a really nice way to see the animals, my picture looks more like I was on a boat ride through the history of paint drying. 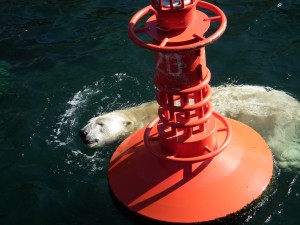 Moving along, the next section of the park, Yukon Country is also extremely well themed, and but for the intense heat, which was now seriously forging two stupid looking red circles on my forehead where my hair is/has been receding for some time now, it could almost have been Canada. In the centre of this ‘land’ is the centrepiece – a giant polar bear enclosure, with rocks, little huts for them to go into and a giant body of water. Thing is, even the polar bears couldn’t take the heat, and they both seemed to be doing their best to stay in the shade and under water for as long as was possible. In fact, the only one that surfaced with any regularity would come up to the surface, sniff the air, and disappear again as if to say ‘no chance’. Check out the picture, that wasn’t just my shoddy photography skills (well of course that was part of it), that was genuinely the split-second our furry friend came to check out the climate. There’s also sea lions (who were performing, so I didn’t see them), a nice area where you can – again, along with a few hundred fellow visitors – go and check out the underwater of the lagoons, which should really offer up better chances to spot the polar bears. Moving along again, the rest of the area had the usual ‘Wild West’ vibe going on – saloon-like buildings, a steam train engine randomly planted in the ground, a pretend train station and the odd moose standing there looking like it wasn’t sure what angle made it look best. 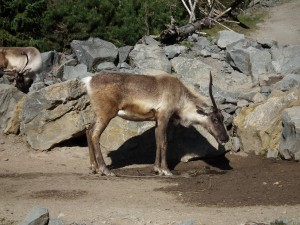 Does my bum look big in this?

By all accounts, the zoo in Hannover is not somewhere you go, have a quick scoot around, and head out. If you were to just go in, and walk the circumference of the zoo and not stop for anything, you’d still need a number of hours. As we continued on out of the Yukon Country land and into some sort of Indian-themed area, a quick glance at the map made us realise that we hadn’t even covered half of the place yet. The ‘India’ of Hannover Zoo begins with a giant elephant space. I say space, because hardly any of the zoo seemed to have full-on cages. The elephants were separated with what was basically a big ditch, while the kangaroos were allowed go wherever they fancied it seemed. Moving along around the top of the park we came to the children’s farm section (I always hated this section when I was a kid, because you can see most of those animals anywhere really, like dogs or a cow) and a giant water slide that Anna insisted I try out first before she’d have a go – since one of us had to mind my bag, this seemed to make sense, until I went down the slide and she announced she no longer wanted to go on it.

So that’s Hannover Zoo – if you’re in Hannover, do it. It’s a little on the pricey side but as attractions go, you can actually spend a serious couple of hours in here, so it all works out.

In the meantime, it’s back to Frankfurt to figure out where the next trip will be!