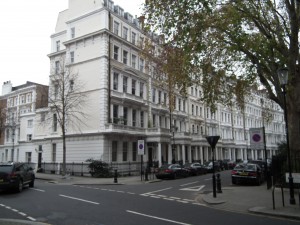 After what can only be described (sarcastically) as another of the most restful nights sleeps’ of my life in London, we were back up at the crack of dawn. Once again, I should emphasise, it wasn’t particularly our choice to be up at the crack of dawn – more so, somebody in the room next to us had decided to go use the toilet first thing. And as I said in the last post, all the doors were strangely spring loaded so as soon as they decided to let the door close, we were more or less resigned to getting up early. 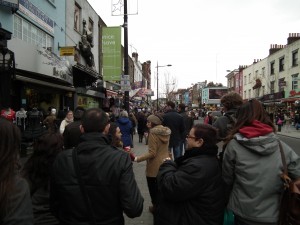 We didn’t have so much time on our second day in London, so we got through the breakfast as quickly as possible and went straight out, with Anna wanting to see some of ‘real’ London this time around, so we headed off in search of Camden town and the famous market. Well, as tastes of ‘real’ London go, it was certainly that – it was so packed, that we queued about 5 minutes just to get out of the tube station, then had to try and merge with the oncoming human traffic with more care than driving on a motorway. So, surprise surprise, Camden was already packed with the streets looking like the areas around Croke Park after a GAA match. We wandered around for what must have been all of 20 minutes before getting lost, a bit frustrated and sick of looking at signs warning of pickpockets. So I’m sorry Camden town, we left almost as soon as we possibly could. But not before queuing another 5 minutes to get back into the tube station.

Next stop, with time getting tighter and tighter, was Notting Hill to see what it had to offer us. I won’t lie, we got off at Notting Hill (which actually looks terrible when you first emerge from the tube station), wandered down the road a bit until we came across a bunch of hardcore Russian protesters who were being steadily outnumbered by the police, then wandered back up the road a bit again until we passed the tube station going in the opposite direction. And then, quite simply, we were just out of time so we had to go back into the tube station having seen only one street of Notting Hill (but very well). We headed back in the direction of Earls Court to retrieve our luggage from the undoubtedly very safe open shed that we had been told would be fine to leave our bags in some hours earlier, and to get some lunch. Surprisingly, our luggage was still in the open shed, but that may have had more to do with the fact that the police were now swarming our former accommodation seemingly in search of a resident criminal. Yes, we truly do stay in all the classy places. 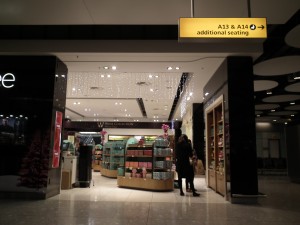 Moving along, the next stop was somewhere to eat, and with some money left over, we were finally able to relax a little on that front. We headed down the road from our place and came to arrive, just as the rain began to fall, at some Indian place called Masala Zone, which was really only noticeable due to the crazy artwork that was all over the inside of the place. But, as food places go, it was absolutely delicious (hence the actual mention).

Time was up, so bags in hand, we raced back to Heathrow as quickly as possibly as we could, checking in our bags and then seeing what else we could possibly afford in Terminal 5’s overly-expensive shops – which wasn’t much – and getting on the plane back to Frankfurt.

A good trip – yes; but a restful and cheap trip – absolutely not!

Keep an eye out in the next week or two for my review on flying with British Airways, Heathrow Airport and the missing ‘second beer’.