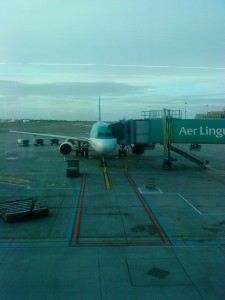 Despite being in a job that requires absolutely no travel whatsoever (unless it’s mind travelling), I seem to be on a plane at least twice a month. How this thought came to me was recently, as I sat on yet another Aer Lingus flight towards Dublin and I realised I’ve actually read the same article about what there is to do in Frankfurt so often and the authors accompanying profile, that I actually not only know every attraction listed, but also know that the author is Irish, married to an Irish man, ex-president of some ski club in Frankfurt and thinks it’s a great place to bring up a family – note to Aer Lingus, two months is a very long time to leave the same magazine in seatback pockets , I can even recite the movie listings for transatlantic flights for December and January. And that’s saying something when I haven’t flown transatlantic.

Moving along, October we flew to Dublin, December brought us to London for a weekend, then to Dublin again in December for Christmas, back in the New Year, only to be back in a plane again about two weeks later to head back to Dublin. Literally, I’ve spent lots of time in planes back and forth over the years, but lately it’s getting a bit much. I’m actually surprised at how slowly my Aer Lingus miles are racking up to be honest. So in all this flying, what are my top five frequent flying observations? I’ll start with the most obvious and work it from there. 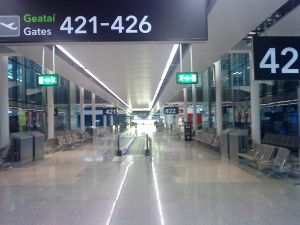 How fast can you get out?

1. Piling onto the plane in Germany is not a good idea. It is critical.

Getting onto a plane, if you appreciate comfort, is a serious case of ‘when in Rome’ when you’re leaving Germany. Anna used to always make a beeline for the gate the second they announced that families and those with small children (aren’t they normally the same group?) could board, which I never understood. Lately though, I’ve come to realise that there’s sense in all of this – Germans religiously bring hand luggage at the upper limits of the allowance, usually in the form of a Samsonite wheel-along and if you don’t race onto the plane with them, there’s not a single flight from Germany you can take where you won’t have to keep your hand luggage under the seat in front of you. Since doing that annoys me terribly, the only option is to hop up out of your seat in the departures hall like a rocket at the first sign of movement.

We have a new terminal in Dublin, which by all accounts is very lovely. However a few things spring to mind that the first-time flyer will wonder about and the frequent flyers will laugh about. The most obvious is the hand-dryers. In the race to make it streamlined, fancy and nice, the hand dryers are recessed into the wall by the sink. In fact a lot of people never find them and end up wiping their hands on their jeans (including myself, to be honest). But once you do find them, you find a more critical flaw – the dryer has a sort of ‘slant’ so as it blows your hands dry, the water just tips out and runs down the tiles onto the floor. The other slightly comical fact about regularly arriving to Dublin Airport, is that on my previous three occasions, there were more ‘staff’ guarding the passport control line, making sure that errant Europeans didn’t try sneaking into the ‘Other passports’ line, than there actually were passport control staff. 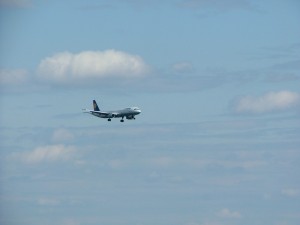 From here to bus in 25 minutes. Comes with my personal guarantee...most of the time.

3. Frankfurt Airport is what foreigners expect.

Frankfurt Airport (terminal 2 in particular) is what airports around the world, including Dublin, strive and fail to achieve. It is absolutely, despite its size, one of the most efficient airports I’ve ever been in. To date, over easily 8 – 10 arrivals, passport control is sufficiently staffed (provided everyone’s ready), the luggage is always already waiting – in fact, sometimes the belt is already turned off – and without trying, you can’t not be out and waiting for a bus within 20 minutes of getting off the plane. Similar efforts it must be said have been made at Dublin Airport but are let down by the slowness of the baggage handling and the scandalous two (of the world’s slowest) lifts in the car park that cause delays regularly of 7 minutes or more.

4. Aer Lingus has improved so much; it makes me want to cry with joy.

I find it slightly ironic that it’s taken us to be deep in recession back home before the airline abandoned its flimsy half-effort at being a low cost like Ryanair and started giving people what we’d been looking for all along – decent service, friendly prices and at least some moderate benefits. Their latest departure away from being a true no-frills carrier is this weird pricing strategy where you can have bags, seat selection, etc all thrown in for an extra 20 quid to the fare price. Personally, I say make it 25 and let people get a free snack pack or something on the plane, but whatever it’s a great start. I mean they were never going to win the battle with Ryanair and at least now their service isn’t so abysmal. And passenger numbers seem to be on the up I hear, so it’s a win all round isn’t it? 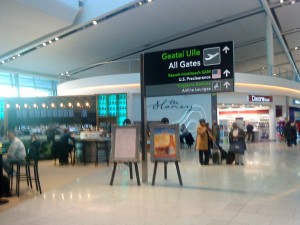 Here in Frankfurt city, you can buy a bottle of water for about 45 cent in a supermarket. It’s cheaper than Ireland generally, and that’s always the way it is. But for some reason, airports and the shops in them continue to hold passengers to absolute ransom for the most basic of items – a bottle of water in Frankfurt airport after passport control in departures will set you back nearly â‚¬2.50. I don’t know where people are getting this idea that this is acceptable business but if a bottle of water in Ireland costs maybe 80 cent and they charge â‚¬1.70 in an airport, this is acceptable, what with there being no other choice. But to charge nearly 6 times as much is ridiculous. I’d rather die of thirst. Similarly, I’m still waiting to see an airport shop in an airport that’s actually selling something really exciting – both my two most regular ‘visits’ have a way of forcing you to walk through a labyrinth of shops to get where you need to be, and yet both of them sell identical ranges of alcohol, electronics, shoddy souvenirs and perfume. I don’t know what it is yet, but there must be more things to sell at an airport that I can’t buy cheaper online than what we have at the moment. Anyone any ideas for this imaginary shop I want to start? Other than cheap bottles of water?

If you’ve any funny stories or observations on flying, passing through airports, then leave a comment below!