Well, for anyone who had been eagerly waiting to hear how the rest of my trip to London and back with BA went, my apologies for the delay but I think everyone accepts that me getting work done through Christmas and the New Year while back home in Dublin was evidently not going to happen! 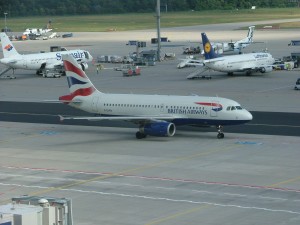 What do we make of BA?

In the end of course, it’ll come as no surprise to anyone that my second drink – my benchmark test of how caring airline staff are – never actually showed up and some 30 minutes later, we came to land at Heathrow’s incredible, amazing Terminal 5. Personally, the last time I passed through the place, I really didn’t get what all the fuss was about. To me, the whole terminal is more confusing than anything else, requiring a bit of a slalom after security through a series of overpriced retail outlets and down an escalator to the actual departures area – if you’re lucky. If you’re unlucky, you then have to actually take a little train along to the right terminal of the terminal if that makes any sense (which it doesn’t, even to me and I’ve just written it). Arriving, you’ll be pleased to hear, is equally an irritation. I think arriving to somewhere is one of the best areas an airport can actually be good at, because it’s dead simple – get passengers from their plane, give them their bags, get them through passport control and customs and out the door as quickly as possible. That’s what people want – nobody’s there, after a flight, to admire the architecture or wander through corridors looking for how to get out. They just literally want to get out. 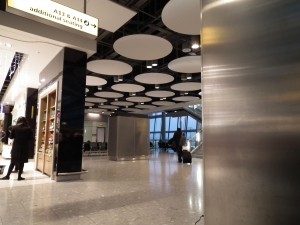 Through T5's Many Corridors...

So I disembarked, wandered along the corridors for a few minutes before arriving at this train station (as I mentioned above) to take us from one terminal to the main terminal of Terminal 5. The train took about 7 or 8 minutes to present itself, by which time there was a number of flight-loads of passengers waiting, which wasn’t great. Then, at the other end, you go up a series of escalators for some reason, walk along a corridor, then (if you spot them) have to go back down another series of escalators to reach passport control. Where I waited 45 minutes. Somebody’s going to comment or write to me that Heathrow is a huge airport and what do I expect but no seriously, such a confusing layout and time robbery is not on at all. Example; I arrived to Frankfurt airport, also a large international airport at 19:55 last week in the midst of the New Year’s air-rush of people trying to get home and back to work. I was already standing out the front waiting for a bus by 20:17 (with my bags), and home by 20:50. Literally, it’s a model of efficiency (as you might expect from the Germans) – you get off plane, walk to passport control, the baggage belt is literally the other side of it and the bags are always already waiting and then you leave, the end. They manage it, so why can’t anywhere else? Even Dublin to be fair has made great strides in Terminal 2 with this where you get off the plane, up an escalator, and follow the same corridor to passport control, baggage, customs and even the car park without turning or changing level. 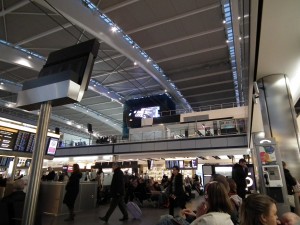 On the way back, things were however slightly better I suppose. I’ve gathered that Terminal 5 is one of those things I just can’t bring myself to like – it often feels designed more for aesthetics and pleasantries than actual usability. Passing through security, there’s literally just a shopping centre on the other side, which if you’ve any sense, you’ll skip right through. The only shop we did want to actually buy anything from was the WH Smith, and the queue there literally snaked from the checkout down past the drinks, looping around fiction somewhere and back to the entrance. Of course if I wanted to buy something from the Caviar House or whatever it’s called, I wouldn’t have had to wait even a second but it goes to show what most people actually want from an airport shop – a newspaper, drink and a bar chocolate. It actually took us so long to get these items from the shop, that we began to fear missing our flight and ended up taking off at a gallop to get down towards our gate, which was thankfully close by.

In conclusion, would I willingly choose Heathrow to transit through? Nope – I couldn’t, it’s not built to facilitate quick and fast movement around the place (or so it seems), even though Terminal 5 is a very nice building. Would I opt to deliberately go there again? I don’t know, for me, BA’s service isn’t that awe-inspiring to merit the extra few bucks travelling with them and since airspace over Heathrow always seems to be congested and causing delays, I’ll probably try Stansted or Gatwick in future and see if that’s any quicker. If anyone has any thoughts on travelling to London, the easiest or quickest ways, or comments, I’d love to hear them!

From London to KL, In Style – BA or Malaysia Airlines?