I’ve been back in Ireland now a couple of weeks – certainly long enough to get into the ‘swing of things’ as people like to say. And honestly, so far it’s been much more pleasant than I could’ve expected, and while I’d never know how long I’d stay in any one place, it’s sure nice to be home, for however long it lasts. But the Irish Times have been running a series titled ‘Generation Emigration’ in which generally someone writes about their experience living abroad or returning home (or leaving home) and then shortly thereafter, the IT’s loyal readers lambast whoever happens to have written the article for their pessimism/optimism/lack of patriotism/youth/insert reason here. So, for all the emigrants who actually are living away and wondering what it’s like to come back, or perhaps even considering it seriously, I thought the handiest thing would be to jot down the first 5 things I’ve noticed that make me very positively not enjoy being home. 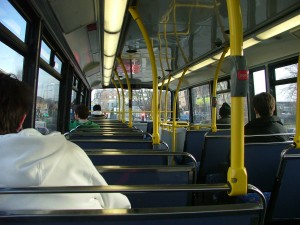 While you were away, I assure you nothing has changed save for three distinct innovations especially in Dublin-based public transport. The first is we now have boards like they had in other countries for years that tell you when a bus is going to arrive. At least, in theory – I guarantee that the 75 to date does not show up within 7 minutes of it apparently ‘arriving’. The second innovation is very exciting indeed; we now have a card called the ‘Leap’ that’s a bit like the Oyster card, but a few years behind it in terms of usefulness (and it’s not exactly the most modern system itself anyway), so you’ll still need an old card ticket for your monthly bus/luas pass. The third innovation is also certainly worthy of note – the Luas now comes with a gang of youths almost guaranteed between Ballyogan and Carrickmines, who very generously dedicate their time to cleaning the windows by spitting on them and giving the finger to any security presents.

Another thing you will surely have missed is â‚¬7 pyjamas from Penneys. When I say ‘you’ will have missed them, I don’t literally mean yourself – more, you’ll have missed seeing people walking around, filling up their car in the petrol station, queuing up in Superquinn, etc in them.

Wearing pyjamas is very seriously the new trend it seems and is spreading faster than the winter vomiting bug in February. Nonetheless, if you’ve become accustomed to people going about in clothes that make sense for the time of year, be it t-shirts and shorts, or suits and winter coats, then the sight of a gang of people standing at a bus stop when it’s 5 degrees outside in not much more than a pair of pink pyjamas with polkadots will surely provide some entertainment…initially, at least.

The Problem with Watches

The last place I spent time in was Germany, so I’m well aware of the obvious potential for me to have sort of…acclimatised to their punctual stereotype. But recently I was informed by someone who stood the chance of making a few thousand out of us that she wouldn’t be arriving until 11:30am. Then, at midday, she called and told us she was running about half an hour late. Finally, I saw her around 3pm.

A once-off you say? Unfortunately not – we have a reputation for being sometimes frequently ‘delayed’ but if you step out for a few years and then step back in, it becomes obvious how chilled out a lot of people are when it comes to sticking to the time. It appears, quite frequently, to be something more of a ‘guideline’ than anything to actually be kept to. Similarly, the standard workman’s appointment of “I’ll be there between 9 and 6” suddenly seems quite ridiculous, as if absolutely no element of a plan could be constructed beforehand. Trust me, you’ll notice it.

Sales, Sales & Not a Euro to Spend

Depending upon how long you’ve been gone for, you may or may not have missed the complete decay of local shops in towns and villages throughout the land that appears to have been even further accelerated. Generally though, the ones that are left have all tried to engage customers either through tatty posters in the window which seem to belong to the 80’s, using Facebook and Twitter hopelessly without a clue as to what they’re actually doing or by doing something inexplicably well and saving themselves from imminent doom.

What you can’t miss however is big red ‘SALE’ signs in literally every window along certain streets, sometimes with no actual ‘sale’ as such to speak of. This activity also permeates throughout supermarkets where ‘Reduced’ prices are found adorning nearly every product. Obviously, this activity has been used to such ill effect that many supermarkets now even feel it necessary to write underneath when exactly the product was fully priced, such is the level of disbelief many customers now have that they’re actually getting any sort of reduced price, or a ‘sale’. In other words, everything is either reduced or on sale, and yet strangely, it’s all still the same price – certainly grocery shopping isn’t cheap and my bill has safely doubled since Germany. But that’ll be the ‘transport costs’ no doubt.

One of the first things that kind of throws you off when you arrive back is bound to be the frequency with which people are eager to relay the weather to you, both presently and in future. To provide an example, I ask someone how they are and they begin with “Fine, but there’s a gale coming in later” like these two seemingly separate facts are strongly in correlation to one another. But then you come to realise – they actually are. You might be fine now, but by the time said gale has hit full-force and you’re battling along the footpath into an oncoming storm trying to get to the bus stop, it all starts to fall together. 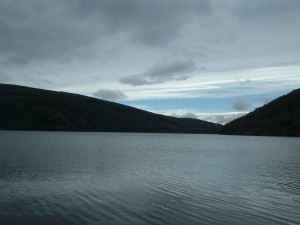 This is the perfect Irish day...for full-scale analysis and debate.

Irish people love talking about the weather, really they do, but only being away (for me anyway) gives any sort of appreciation for why that may be the case. And there’s really no doubt that the wind in Ireland is so much more problematic than in other countries – they may have snow in Germany, or floods in Malaysia, but only in Ireland can a ‘normal’ day involve winds at such high speeds that you can actually feel your tram rock from one side to the other as it crosses a bridge. Best find your anorak.

So that’s it, if anyone wants me to send them a starter pack of â‚¬7 pyjamas, a luas/bus ticket (not the worst idea if you won’t be back for a while – beat the next price increase now) and a raincoat, just let me know! They’re both reduced and on sale…