You Know It’s Quality When…

Lately I’m having a run of weekends away from home for work purposes and, in my desperate bid to keep costs down (even though yes, I know, they’re not ‘my costs’ as such – but I’ve always thrived on spending little to nothing to stay in places), I’ve been either handpicking the ‘cheaper’ stays, or free if possible.

Last week though, not knowing anyone living locally and with only a day to spare, I had to finally suck it up and actually spend some money to stay down in Killarney – on the same weekend as the Ring of Kerry cycle, which saw 9,000 cyclists descending on the place for the few days. My option, booked only one night in advance, the ‘Quality Hotel’ was a mere â‚¬100 per night and seemed reasonable on booking.com. I also reckoned it might, for a change of pace, let me see what â‚¬100 gets you in terms of hotel stay in Recession Ireland. So what did I think? 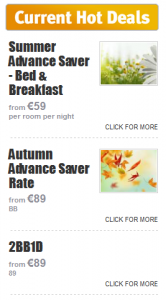 Well before we go on – bear in mind I booked this literally with no notice on an extremely busy – probably the peak – weekend of the town for the whole year so I wasn’t expecting much. I’m sure you can get much better deals than what I did, but that’d require advance booking, good planning and a number of other attributes I couldn’t manage. And all told, it wasn’t bad.

I’ve never even been to Killarney in my life which is pretty awful for an Irish person who’s lived in Ireland most of the time, reckoning that it’s a place for American tourists only and conference attendees, and while the place seems to have been on the outskirts of town and the food options shut up as early as usual (which seems a big strange on an evening when you know hundreds are going to descend from Dublin well into the evening), it was relatively peaceful and quiet. It did however have the usual hallmarks of an Irish hotel; extreme warmth in the rooms bordering on stuffiness and towels starched to such a point that you can barely prize the two ends apart.

And, to some extent, I also have to give myself some credit for the accuracy of my guest predictions – the night we arrived, there was some toe-tapping music on the go in the restaurant, which looked to be very well filled with check-shirt wearing, white-sneakered Americans on tour. Likewise, when I rose the next morning and headed off for breakfast, there they were – seemingly not a hangover on them to be had, rifling through the Fodors guidebooks on what the day’s activities would bring. Their kids meanwhile, were being entertained just outside by some children’s entertainer. And this isn’t such an indictment on the hotel itself, but you can’t escape the fact that a lot of Americans on holiday (and at home) are exceptionally, almost irritatingly, loud. In total, I think I may have spent just under 8 minutes at the breakfast table – not helped by the over-eager staff clearing my table every time I tried to get up to get some more food.

I hear there was a pool somewhere although unfortunately I lacked time to find it. And what about Killarney? Well, as you can see from this article I didn’t even take a single picture – the place is fine, and heading out towards the Ring of Kerry, the scenery truly is magnificent; or at least would be, if the Irish summer was a summer and not two words with no meaning. Will I go and visit there again?

Hmm…well will there be better weather any time soon? By the way, who knows what the special offer on the right actually is (bottom)?