For as long as I live, I will never forget my trip, in 2005 (as part of an extended tour of Europe) to Como, the beautiful Italian town backing straight out onto the lake of the same name. 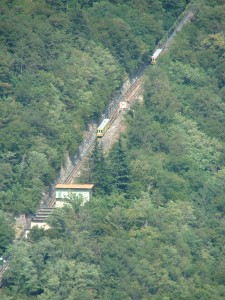 The longest journey of my life…at the time.

Owing to our collective deepening financial crisis, we had begun consuming McDonalds food for both breakfast and lunch (and occasionally dinner), passing up on many of Europe’s culinary niceties in order to get hamburgers for â‚¬1, from which we could spend more on travelling and seeing things. In Italy, we came across an almighty deal. For whatever reason, the Eurosaver equivalent in Italy was only 50 cent. Instead of 3 hamburgers for lunch, we could afford 6. So we did, I returned from visiting a friend in Switzerland where my fellow travel buddies introduced me to the 6-hams-lunch. Yes, you felt bloated, queasy and extremely ill for about 3 – 4 hours afterwards and yes, you didn’t really feel 100% for a day after…but it was dirt cheap, and that’s all that mattered.

Roll on two days later and there we were, descending gently down the mountain-side in some funicular railway when terror struck. A call of nature was required, with immediate urgency. Turns out the 6-hams-lunch wasn’t something my system was too fond of. Time was very much of the essence. The doors opened at the base of the mountain and I shoved everyone out of the way to start pacing/waddling the streets of Como in search of any public convenience. I tore into the nearby McDonalds, where it was undergoing cleaning. I walked into another place to be informed in Italian it was customers only. With no option left, I made a beeline for the train station. I ran up the stairs, finding the toilets like a heat-seeking missile that knew its target in advance. And there it was – a porcelain hole in the floor. 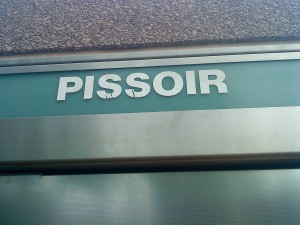 When all you need is a…

I couldn’t believe it at the time, and yet it set off a chain of events that has shaped my travelling history with most unfortunate and untimely requirements for a convenience, and the lack of ever being able to find one. It is the one very primitive and yet basic necessary that remains unfulfilled while travelling even to this day.

Ultimately, I ended up waiting (skipping from one foot to the other) until the train arrived, hopped on, rocketed to first class, caring not a jot who wanted to see my ticket, and using their facilities. Which were very nice, by the way.

The lack of standards and consistency between facilities around the world has been the cause of much annoyance and in some cases, pain ever since. Ultimately, I became familiar with the porcelain hole in the floor not by any amount of travel in Italy, but during my trip to India in 2009. On the evening before leaving Goa, my room-mate with whom I had shared my mud shack for a number of days, proposed inviting me to dinner to repay some minor debts. In the end, we did, I foolishly ate chicken, and then hopped on the Rajdani Express to Kerala the next morning. Unfortunately within about an hour of the journey, things took a turn for the worse and I began to feel very unwell. I would proceed to be very unwell for the following two weeks but in the immediate period, there was only one toilet in my carriage that facilitated poor health – and surprise, surprise; it consisted of a stainless steel hole in the carriage, through which before sundown you could see the track underneath. Delightful. With serious urgency on this occasion, there was simply no way to wait for anything. I will never look at a stainless steel hole in a floor with the same lack of knowledge or nerves again. 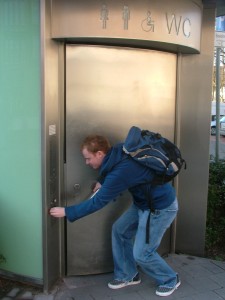 Breaking and entering at its most desperate.

Another bugbear of travelling to date has been the high price placed on relieving yourself. In Germany meanwhile, the public toilets (which are frequently those scary ones that clean themselves when you leave) always charge a nominal fee to enter. In one case (pictured), I spent nearly â‚¬2.50, dropping coins and shoving the door in the hope it’d finally let me in whilst in desperate need. It never did and ultimately, there again I waited in the train station for my train and then proceeded without delay to the on-board facilities.

So if I had to turn this around, what’s the worst experience you’ve ever had looking, or finding a convenience while travelling? What problems have you had trying to answer a call of nature? Please tell me I’m not alone.