With the lingering and painful memories of trying to reach the airport at the crack of dawn a large number of times in the past few years and the – admittedly, comfortable – Aircoach journeys traipsing across the city while everyone else continues to sleep soundly, we decided that with a long journey from Dublin to Abu Dhabi, Abu Dhabi to Kuala Lumpur, and Kuala Lumpur to Kuala Lumpur ahead, we’d go for the airport hotel option this time round.

If any airport hoteliers are in fact reading this, please get in touch and let me know how busy can airport hotels actually be, especially in Dublin? Because there is literally a plethora of choice for an airport that, let’s be honest, isn’t actually that big or serving that huge a population. There’s so much choice and it seems like so many are named very similarly or offer such similar features and prices, that it’s impossible to be sure you’re booking the place you intended to. I, for example, actually intended to book that shoddy looking older premises (reasoning it would be cheap enough) you spot as you drive into the airport, but only in the latter stages of booking realised I was booking a room at a place, Carlton Dublin Airport, that’s still a few minutes shuttle away.

In the past, I’ve also gone out of my way to stay in the grimiest, low-cost dives I’ve been able to pre-book. For a change of pace then, I opted for Carlton’s “Rooftop Suite”, which was actually embarrassingly little more in price than the normal room charge (props to the Carlton web people mind you, for making it so obviously a better choice when you’re trying to book a normal room). Aside from being quite unfamiliar with such supposed luxury, what did I think of the whole thing?

Actually, it was well worth it. â‚¬140/150, whatever it was, is obviously quite a bit for a one night stay wherever it is, but there was so much space in the room between a seating area not much smaller than our actual living room, a bed that was suitably comfy and a bathroom that had me tossing up between a shower or a bath, I really was quite pleased the way it worked out. To wake up just an hour or two later than you would otherwise have to on a mammoth journey, I assure you, also is worth its weight in gold – wherever you stay beforehand. No WiFi (there is apparently, but it didn’t work for us, which to be honest, would have been a major downer if my phone didn’t act as a hotspot for us) and the only other downsides, which I suppose can’t be helped, were;
1) The gentle hum of aircraft taking flight just feet above our heads. But this wasn’t a big deal as the gentle hum would’ve been more a thunderous earth-shaking vibration if we’d been outside.
2) The view from our window was one of the myriad car rental agencies properties’. Except there were no cars even to look at, it was just a very brightly-lit empty piece of barren tarmac. With the occasional aircraft noise, a view of a plane instead would be nice. 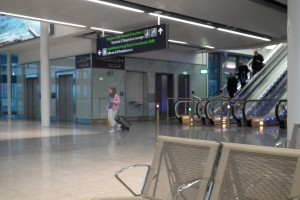 Bright and early next morning however, and we were onto the free shuttle, whilst I conversed initially with who I believed to be the driver…of course turning out to be another passenger. Now, I must warn you in the strongest possible terms – if you are taking an early morning flight from Terminal 2 in the near future, you may be tempted by the possibility of a restaurant upstairs after security that is decorated and marauding as a sort-of fresh fruit and food market. You must not be tempted. I cannot say it strongly enough.

We had our breakfast in this place – and while it looks nice, things came apart quite quickly with the staff on-hand more than willing to show us how little they care. To begin with (Harvest Market is the name by the way, I looked it up to save you the trouble – although it’s no doubt run by SSP or some other such airport catering conglomerate, the quality of who’s offering varies frantically from venue to venue, which means no matter what you buy in the airport, you’ll still be probably giving them some business), we grabbed some orange juice and I shuffled along for the breakfast counter. There was nobody there and while a member of staff came over and I explained my wishes to her, she walked off then to look for another staff member – he was in fact hiding behind the partition trying to finish off an SMS to someone. In fact, when I initially joined the queue, there was no queue, but by the time the one and only appointed breakfast server had returned, there was 5 of us waiting. The food itself, I didn’t realise at the time, was horrendous – I’ve never tried water-soaked scrambled eggs, but now I have. Meanwhile, Anna had discovered an army of ants and bugs eating through the bananas and was suitably horrified as she tried to rid her selection of its inhabitants. Needless to say, as in typical airport fashion, the damage wasn’t far off â‚¬30 and despite telling our friendly cashier of the infestation across the way, she brushed it off and did nothing about it (I know, because we sat just across from her afterwards for about 30 minutes). Rant Over. 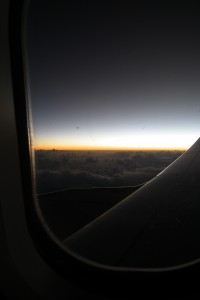 Terminal 2 otherwise, is no more or less exciting than any other airport and it wasn’t long before we were off the ground, pointing in the direction of Abu Dhabi and watching as the morning quickly turned to afternoon, then late afternoon and finally evening as we continued the long trek to AD.

Actually, there’s time for one final rant. Etihad’s Dublin service – what’s the story? We’ve flown a bunch of Etihad routes over time and by and large the offering, as economy class goes, is outstanding. The staff are similarly attentive, semi-interested and generous with the drinks if nothing else. But the two times I’ve flown out of Dublin (inbound also seems to be OK), the staff are relatively surly, highly and openly uninterested and not far from making you want to travel Emirates on your next route, just to be sure you don’t chance upon such a surly bunch again. But it literally only seems to affect flights out of Dublin. Anyone else notice?

Next time round, I’ll tell you how the rest of the flight went, how dull Abu Dhabi airport is and our first big accommodation disaster…