The next morning in Singapore, we set about first trialling our luck with Singapore’s modern public transport system. To give them some credit, once you get past the nonsense of being dispensed a ticket that you subsequently have to return to a vending machine for a refund post-journey (as opposed to the machine just collecting the ticket on the way out), the system really is second to none. It makes the DART look half a step away from being a museum relic…not that that would take much effort I suppose. 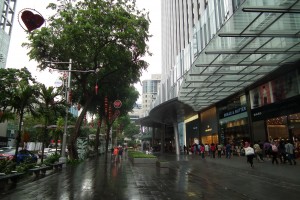 A pleasant morning in Singapore…

We met firstly with a distant friend of Annas for coffee (after an embarrassingly long time trying to find the only Starbucks in the building as it turned out). Note to all, the rainy season in Singapore this year (2012) seems to be particularly bad and so before we’d even managed to get out into the muggy midday weather, it was already tearing down with rain making every movement between buildings as rapid as possible. Moving along, we went down the main shopping streets, following our noses as long as we could (in between showers), and following the road all the way down past the famous Raffles Hotel, along past countless – although I did try to photograph each one – signs prohibiting eating, drinking, smoking, flammable materials, durians, cycling, dogs, feeding cats and skateboarding until we somehow made our way right out to the Singapore Flyer, one of Singapore’s major attractions and one, despite being on the relative outskirts of town, it seems they couldn’t be more proud of; even if it has since been eclipsed by some other big wheel in China.

They’re so proud of the wheel in fact, that the tickets, being honest, are a bit of a king’s ransom weighing in somewhere around 30 Singapore Dollars. Not only that, but like all good tourist attractions, it’s surrounded by countless other possible ways to waste money like flight simulators, ice cream shops, etc. all before you even actually get to the main thing itself. 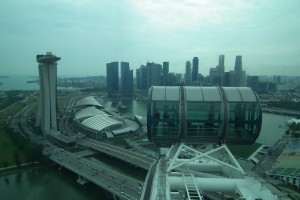 There’s a bit of an exhibition that appears to have been set up by someone who may have been smoking substances at the time just prior to getting onto the Flyer – and I mean that in a good way. You pass through some darkened halls with either neon lighting, or wild projections on the wall, or sometimes a combination of both; throughout which various facts, figures, historical items and stories are relayed via the whackiest exhibits you can imagine. It may sound more annoying than anything – and I’d say it would be if it was maybe your second or subsequent visit – but actually it’s a world better than the London Eye where you sort of just queue up like in Funderland and then all pile on with no sense of occasion whatsoever.

Anyway, once on-board, the whole thing takes about 30 minutes to get around and to be honest, even though the cost to me at least seems a bit steep, it was well worth doing and the views were unbelievable.

Back on terra firma once again, we eventually caved in and went to the overpriced local ice cream shop, which provided amusement for all the wrong reasons. The guy serving, seemingly unaware he was actually at work, had the music pumping and it came complete with all the bad words left in, as parents and young kids trying to buy an ice cream were treated to a hilarious and very in-depth musical breakdown of banging girls in a club. Understandably others may not have been so impressed with his tact, but I thought it was comedy gold if nothing else. 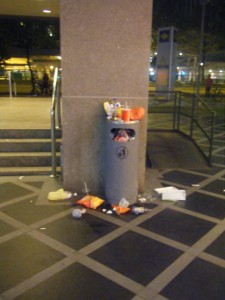 Since we’d kind of consider going back to Asia and Singapore might also be a possibility, we decided in the evening to go out and see the kind of areas people live in in Singapore – since very few realistically live downtown. There were a few suggestions, mostly out near Changi (the airport) but we decided to go to a place called Holland Village. To be honest, with the rain still pelting down, the place didn’t seem as incredible as I might have hoped – although it was pleasant, and notably under widespread construction which always makes things look a bit dreary. We took a look around a supermarket though to see what kind of salaries would be required and I can assure you that the majority of Singaporean residents must be vegetarian judging by (understandably) the incredibly expensive cost of any meat. You have literally never seen pricing like it. There’s also a shopping centre with narrow corridors and a layout so confusing once you want to get out, that it took us some time to find a staircase to escape down.

Next day, Universal Singapore and then on to Bali…