As detailed in the last post, we had a very serious issue with our first accommodation in Kuala Lumpur – the “Deluxe” Private Unit. Although the cleaners did a surprisingly acceptable job that we had had to wait for outside (without pinching any of our stuff, as our dear neighbours had informed us was a strong possibility), the place stank of smoke once again by sunset and the toilet, without anyone using it, started smelling horrendously by itself. The shower, similarly, came resplendent with a mould collection worthy of note and chipped tiles in very valuable locations in terms of knocking your limbs off. 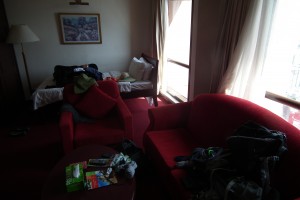 Early next morning, packing gets underway…

The next morning, we knew this couldn’t last. Sharif, as he knew, wasn’t really an easy option for us as we didn’t have a Malaysian phone so we repaired first thing down to Starbucks in the Times Square shopping centre to use the free WiFi (and of course, enjoy a hot beverage). I decided to try my luck first with an e-mail to the “travel agency” masquerading on booking.com as the property (there's a prize if you spot my review!), some dude called Mark. My e-mail went like this;

Thank you for this detail [relating to another e-mail he’d sent me beforehand]. However, we are very disappointed with this booking;

– The room was not ready when we arrived (4pm) and we had to wait nearly an hour.

– The towels in the bathroom were dirty AFTER cleaning service.

– The room smells so strong of old smoke, it feels like we are smoking in our sleep and everything is starting to smell of smoke, even though neither of us smoke.

– The toilet room smells of urine, again this is after being cleaned.

– The bed sheets are also stained in places.

– There is no internet, even though in your booking.com ad it says it is available for an extra charge.

– Our neighbours in a nearby suite came to us yesterday (while we were waiting for the cleaning) and told us that the suites are not for short-term lettings and that it is not legal, and that they have had a lot of problems with people in our suite…” 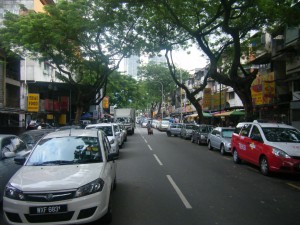 Of course, in hindsight I could add even more to that including the fact that the hotel pool we were allowed use, we really weren’t supposed to it seemed. When we presented ourselves and asked for towels, the guy looked at our card, snorted and told us that it wasn’t for private residents. Which of course we weren’t.

It would turn out of course, that in typically Malaysian style, Mark wouldn’t actually write us back until the day before we were due to check out – even though he was very capable of responding within a day on a previous occasion.

We looked at other hotels, including one – the Swiss-Garden Hotel – that I’ve repaired to a number of times when things have gone downhill in KL in terms of my various living spaces. They’ve opened up a new ‘extension’, the Swiss-Garden Residences some time ago which I’d never had the chance to try so with the intention solely on getting our holiday back on track, we went and checked them out first, scared witless that these ‘Residences’ may also be privately-owned. They weren’t and after being informed that it was cheaper to book online (quite stupidly) than to book at the reception desk I was standing at, we ran back quickly to Starbucks, booked, and then fled our hideous ‘Private Unit’, literally running across to the Swiss-Garden and arriving in a filthy sweat. But it was a sweat that was well worth it. 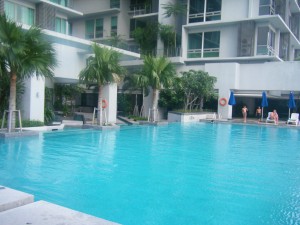 We literally waited for the pool to be this empty…

So, my thoughts on the Swiss-Garden Residences? Well, they were of course a dramatic improvement on the hideous Berjaya Times Private Unit across the road – and I’m very glad we got to stay in them at such a new point of their existence, because to be honest, the current attention to detail and ‘standards of care’ aren’t going to see the Residences look great for too long. The hotel next door, was always kept extravagantly well in spite of its age and came with a few nice touches like free internet in the rooms and nearly always a complimentary breakfast. The Residences meanwhile is already showing signs of carelessness – notably patches of paint being worn away at the lifts, the speed of the lifts, the walls around the suites themselves and the bathrooms, which also smelled most of the time and the shower seemed to be perma-blocked, meaning you got a bath every time whether you wanted one or not. Most upsetting though, was a daily charge for the internet – come on guys, this is 2012?! 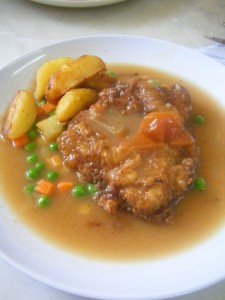 The pool area was very nice indeed, as was the restaurant and balcony around it. My complaints here stemmed from the lawless children who went completely unsupervised in the area and seemed to always be standing on my deckchair when I was in the pool or else dive-bombing into the pool from just in front of my chair when I was on it. There were staff there alright, they just didn’t really care. It’s a shame – the Swiss-Garden has rescued me now countless times in KL, but I really wasn’t pushed about the Residences and if I’m honest, I don’t know if I’d pay the extra bit to stay in them over the hotel again.

The few days however passed rapidly in Kuala Lumpur between catching up with old friends over food and some drinks, going shopping (what else do you do in KL?), the very odd bit of sightseeing, more food and going back to my favourite old haunts, like Yut Kee for one of their absolutely delicious chicken chop’s (how many, I wonder, have I consumed over the years?). We also picked up tickets to head down to Singapore and all in the meantime, I waited to hear back from Mark and see if he’d pick up the gauntlet…