The Long Road to Bali 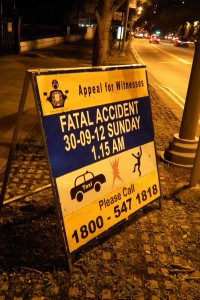 Are you joking me?

The next morning we were up even earlier than the crack of dawn to get down to our basement-located MRT station for the trip out to the airport. What I will give Singapore is, you can dodge taxi’s the vast majority of time (see my original rant on this topic, some posts back) which is great considering how little it appears they actually want to take passengers to their intended destination.

Singapore “Changi” Airport wins a lot of praise, regularly, as a great airport, convenient, fun to transit through, etc. but even after the unquestionable “fun”, I’m still strongly of the opinion that no airport can be fun to be at early in the morning, no matter what they put in it. We hit up the Subway (one of the most horrendous Subway sandwich experiences I’ve ever had, just to clarify – so awful in fact that I only had a Subway again a week ago in January, when this was still last October) before boarding our flight to Denpasar.

Air Asia is a cheap airline, not a fun airline and I’d struggle to say we livened up any more on the circa 3 hour flight down to Bali as we refused flatly to buy anything on the flight and sat in that awkward half-awake, half-asleep way the entire trip. Denpasar Airport on the other hand comes equipped with a number of amusing moments for the first-time traveller. First on the list is the (brought about by the lack of a jetbridge to connect you directly with the terminal) almost hangover-like intense blast of heat that turns everyone on the plane into a tired-looking, profusely-sweating collective of wrecks. Then there was the bus ride to the terminal – the trouble was, the bus driver’s first gear was no longer ‘serviceable’ as they say, so after cutting out a few times, we got going in a belch of thick exhaust smoke in second gear. Then the entrance to the airport arrivals area, which is decked out as if they more or less plopped it all down in the middle of an old temple. Now that’s more like a fun airport, even if they didn’t at all mean it to be. 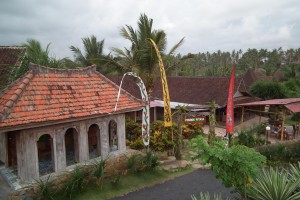 A favourite…and source of internet at the same time.

Sadly, there’s a charge payable to visit Bali – I’m always a bit loathe to pay these charges ever since I was caught out in New Zealand with their ridiculous departure tax – but considering the work they’re doing next door to make the airport new, and possibly a lot less fun and original, I can kind of appreciate it. Aside from that, we were only there thanks to the generosity of our friend Carol (and husband, Michael), whose site(s) I also work on (thank you, again!). Our driver was at least initially, nowhere to be seen. And while Bali’s taxi drivers are a very enthusiastic bunch if you’re not familiar with Asian taxi drivers, we’ve developed (me, in particular) a very specific nod of the head that seems to always do the trick so we stood outside Starbucks for a while, while I nodded my head with such frequency that it probably appeared I was having some sort of allergic reaction to taxi drivers. 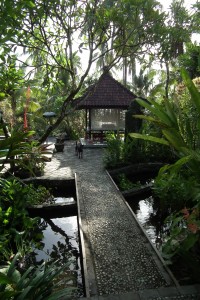 Into the car and onwards. Now, I’ve travelled in India and a host of other places where the traffic is known for being a bit lunatic…but this was hardcore. There was one particular junction (marked by a stone Buddha in what was otherwise the middle of two streets) where two main roads seemingly just blended together. The result was complete chaos of the very highest levels. Despite consistently scoring highly on ‘spatial relations’ in aptitude tests throughout my life, I failed to understand how 30 cars could fit into such a compact space of two roads becoming one even smaller road and somehow still be moving along, steering frantically left and right to avoid hitting others within millimetres of each other. Not much farther down the road, we came to the first recommendation of the trip – food shopping at the Bintang! It’s rare that you get excited about a supermarket but we tore into it with reckless abandon, Anna stocking her trolley up with fruit, bread and other essentials. I, on the other hand, stocked my trolley up with fruit, chips and several cases of the local brew, also named ‘Bintang’. The bill? 475,000 Rupiah. 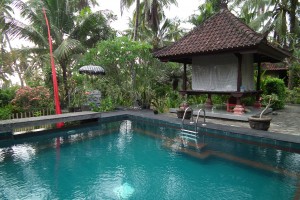 Back into the car and onto the road once more, we drove for a while. Then a while longer. I changed positions a few times, before starting to need to use the toilet. Carol had forewarned us that the journey could be between “2 and a half hours, and all day” – somehow I’d completely forgotten this in the process of buying fresh milk and not using the toilet when I’d the chance. The view and the scenery, to give credit, was exactly as predicted…that is to say, amazing. After a few hours, I very deliberately weaned myself off drinking any more water for fear that it might exacerbate the situation. In total, the journey was close enough to 4.5 hours and I somehow kept myself relatively composed on arrival and didn’t actually go racing to the toilet until everyone had left.

And by everyone, there was quite the welcome committee. Carol and Michael’s house, located in a very pleasantly quiet and sedate area came complete with its very own welcome committee – Anna, as usual, did a reasonable job of meeting everyone and looking relatively intact while I traipsed behind, instantly forgetting names and probably looking like I’d been kicked out of a nightclub as opposed to a well-heeled guest. But, nobody seemed to care and the house – evidently spectacular, before we’d even set foot inside!

All I needed was an ice-cold Bintang, a shower and a chance to take it all in…