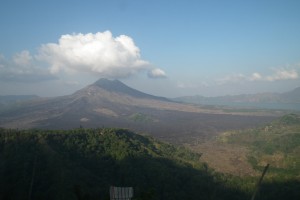 Stopping just long enough at the volcano for a number of pictures, a quick debate on whether some of the ground we were looking at was in fact lava-tarred or just barren and a brief discussion on why we hadn’t stopped at the entry box to pay, we were back in the car and continuing on in no time. After the earlier part of the journey, we were all pretty tired and getting more and more anxious to bed down for the night. We stopped very briefly at a temple at the top of a hill, during which Anna spent almost the entire time debating with a friendly local over the price of a dress to visit the temple, which we actually had no intention of doing anyway and so after much debating (and some hardcore guilt-tripping, the likes of which I have been employing for a number of negotiations since) we carried on in the car, finally coming to a stop at a hotel recommended by Made, our driver, the quite-luxurious looking Aditya Beach Resort.

As with all things regarding tourism in Bali, some hardcore negotiation followed during which we basically bartered down the price of a room, and when that was down, the price of our early morning excursion the next day to see the dolphins. Negotiation successful and keys handed over, our luggage was deposited into an outsize wheelbarrow and we were led to our room. The room was actually very pleasant on the inside – if perhaps a bit old school – with TV, well-sized if a bit pongy bathroom, and a very efficient air conditioning unit which belied its age. After reaching, as my grandmother would say, our elegant sufficiency courtesy of the all you can eat deal in the restaurant it was straight off to bed and off for a good nights sleep. 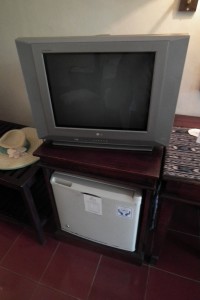 The source of the irritation…

Except it wasn’t. Roughly every 20 minutes a gentle rumble would escalate into an all-out take-off as if our room was now screaming down a runway about to take flight. This all-out rampage would last several minutes before receding back to nothing more a gentle, sleep-inducing rumble. And it did the trick well – the first few times we woke up startled, before being lulled back to sleep gently. But as the night wore on, somewhere around 1am, we realised this lullaby noise was merely a trick in inducing us to sleep before waking us up in a panicked sweat some 20 minutes later again. Eventually, somewhere around 3am, the air conditioning unit got the blame and was promptly switched off. But curiously, as the temperature began to go unchecked and we slowly drifted off again, in a widening pool of sweat, we were both startled back to liveliness by the jet engine reaching max thrust once more. The culprit, it would turn out sometime around 4am, was the fridge. Plugged out and with no noise anymore, one hour sleep was left to be had.

Back up, shorts and t-shirt on and straight out to the beachfront for our dolphin trip. Now, we didn’t really know what to expect of the boat, but given the size of the group (circa 25 people), we reckoned it would at least be relatively seaworthy and stable – not quiet. Instead, everyone was split into groups of two or three and shown to what was effectively their private kayak with wings. After hopping into our oversized kayak, our captain, a man of no more than 21, lit up the first of many cigarettes, fired up the engine in a belch of thick black diesel exhaust smoke, spoke a few completely unintelligible words to us before setting off. 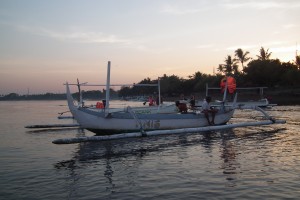 Now, it’s worth remembering that we were effectively chasing dolphins. But so were about 20 more of these oversized kayaks – and while it was very interesting and an experience definitely never to be forgotten, we did sort of come to question if the dolphins were really that thrilled having at least twenty boats chasing after them every time they had cause to surface. At one point in fact all the boats made a complete circle where we all had seen the dolphins moments earlier – needless to say, this tactic was less than useful as they re-surfaced somewhere completely different some time later. Our captain, though evidently quite young and with probably not a long life ahead of him judged purely by his intake of cigarettes, proved to be quite a master at predicting the whereabouts of the dolphins and we broke away several times from the ‘pack’ and ended up having great success locating them. Nonetheless, the last time I saw dolphins in any number was on a catamaran heading to Vancouver Island at about 40 knots and it was a short-lived experience so whatever the dolphins may think of being hunted by a bunch of diesel-belching boats every morning, it was wonderful at any rate and set us up for the day.

Wow. Good start to the day…

Back on dry land and with breakfast thrown down the hatch and bags packed, we were back into the car. After the early morning sun(burn), I was happy enough for the air con again and as we drove, climbing back up the same hills we’d come down the previous night to get to the hotel, our initial start to the trip was cut short to observe a stop at a waterfall. The waterfall – in our minds anyway – will always be more notorious for the outrageous length of the walk to get to it (complete with highly questionable distance markers) than for the actual wonder itself. Bali knows how to do tourism to the extreme and I’ve never before seen a waterfall come with such an intense amount of associated souvenir shops. We walked for a good 15/20 minutes each way (at a good pace), with souvenir stalls being spaced roughly 5 meters along for large stretches. But, thankfully, where there weren’t souvenir shops and aside from the waterfall itself (which was lovely), some of the surrounding scenery was delightful by itself – pictured – and was worth the walk.

After the waterfall, we returned to the car (ice creams in hands) before continuing on for the rest of the days travelling, which I’ll cover next time round!