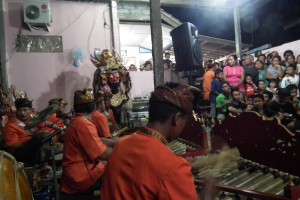 Last place I left off, we were nearly at the dance. We sped along the narrow ‘highway’ for about 20 minutes onwards from the night market, before taking a sharp off-road detour so abrupt that the remainder of my Martabak was nearly catapulted through the air to the other side of the car. We rumbled along the road through the complete darkness for maybe another 10 minutes or so, before driving gently through something of a village, with gangs of youths loitering on the streets, the odd person looking completely dazed by the cars lights and a few houses – and then coming to a stop. We wondered had we missed something, but no a barn nearby was the site of the forthcoming dance. Now I just want to say – I’ve seen lots of dances, but this one was a new one. It started off with a fair bit of noise, one side would bang out a tune for upwards of 5/10 minutes, before the other side would suddenly and almost without warning pipe up, replacing the sound of the other half the room. And as this progressed, at first a dragon appeared out of nowhere (seen in the video below), before retreating. And what happened next, will forever redefine my idea of a ‘freestyle’.

A girl sort of came out (again, from nowhere), and moved around doing some sort of – what we perceived to be – cultural dance. Suddenly, after some jeering and jostling, a young boy about 16 was thrust (or maybe thrust himself, I can’t be sure) to the front of the crowd before turning back nervously, looking forwards, and throwing himself down into the beat. It started off with a sort of nervous nightclub grinding-like dance as he got closer and closer to this girl, seemingly not really sure what to do (it was a situation I am all too familiar with from back in the day…) before basically, there’s no pleasant way to describe this, taking her from behind…full on…except still clothed. Myself and Anna looked at each other, figuring some unspeakable act had been committed and the boy would be removed very soon. But no, he was removed alright – by another boy with more zestÂ  for the experience. And speaking of experience, as this went on for around 2 hours, there seemed to be plenty of it on show as kids as young as 8 or so got involved, also showing (over their clothes) the woman a good time. Everyone sort of got into it (we were also involved at one point) but we came away still wondering was it supposed to be like that. As I say, I’ll never think of a freestyle in the same way again.

The next morning we were off on our trip of Bali. I won’t lie to you – I only had one beer the previous night and yet still wondered might I have hallucinated what had taken place. But the video evidence was there. 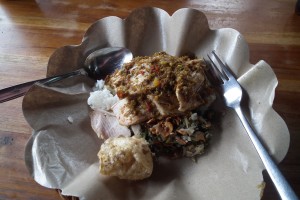 We were into the car and on the road by around 11, bound firstly for Ubud and what I was promised would be Bali’s premier Babi Guling; of course, it could have been Bali’s worst too to be honest, having never tried it before or even knowing what I was expecting. We arrived to Ubud some hours later (I did say Bali traffic and driving in general is an unusual experience at best!) and I began by almost throwing myself into the Babi Guling restaurant, which wasn’t far off closing by this stage. In the end, myself and Anna got the last two portions – and really, I was the big winner to be honest as she didn’t eat a lot of hers! From there we wandered around the town, took in the market, went to one of those slightly freaky fish massage places, bought some souvenirs that we hoped wouldn’t tip our luggage over the allowable weight and returned to our car, having freaked our driver Made out sufficiently already with our lack of spending considerable time anywhere. 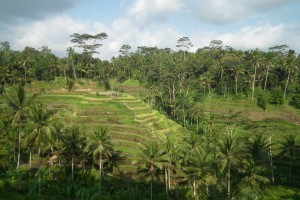 View from the road!

Back into the car and it was only a short-ish hop along the road to our next port of call, which we also spent only moments taking in – the rice paddy. With an absolute life-threatening fear of snakes, I had been informed only earlier in the journey that rice fields were the very place you might expect to come across a snake, or a family of them. This meant that our trip to the rice fields would now be a short one and almost certainly not involving much barefoot trekking. Nonetheless, even from the roadside (pictured) it was probably as picturesque as it got. I couldn’t even really imagine it being much better walking over to it.

We were down in only 5 minutes and back into the car for the next leg of the journey onwards to the volcano, before finishing up for the night – all for next time!