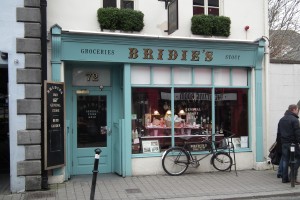 So picking up from where I left off in the last post, we were not far off our visit to the Smithwicks Brewery, which itself isn’t far off being gone for good.

We wandered around Kilkenny for the gap in between, pacing up and down the streets, seeing what shops they have that we don’t, going up and down (and there is a lot of them) the narrow side streets and seeing what they had, wandering into shops and back out, so on. One thing you can always be sure of in nearly every Irish town, it almost goes without saying, is that there’s always either a large Dunnes Stores or Tesco nearly in the town centre. Kilkenny, for the avoidance of doubt, has a Dunnes.

It has a lot of cute shops alright, but so as I don’t get an e-mail telling me it wasn’t worth the trip, it is also quite a small town and you can pace the whole town in a day trip if you, like myself, walk it at a reasonable speed. 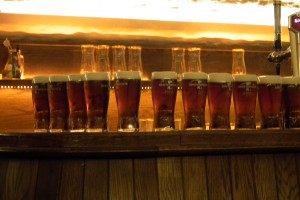 Back to the Smithwicks Brewery then for our tour – the first and most obviously striking thing about this particular brewery tour is its lack of ‘corporate’ when compared alongside the Guinness tour up in Dublin. In other words, for anyone who hasn’t been, the Guinness tour is very long and large, almost cocooned from any actual production that might also be taking place on the site and it’s more like a designated visitor attraction than a visitor attraction that grew out of showing off the production and facilities. The Smithwicks tour meanwhile, comes complete with hi-visibility clothing, safety goggles and rooms that clearly smell of industrial beer production. I know it’s bound to happen, but it’d be a terrible shame to lose it – process efficiencies and corporate ‘unification’ aside.

In fact, the last time I had such an ‘honest’ tour was at this place some years back, the Steam Whistle Brewery, just literally opposite the CN Tower in Toronto. Basically, they weren’t long in the game and the tour consisted of a few beers before going around; a tour that was more or less completely unplanned or scripted; and then a few more beers afterwards. It was actually one of the best tours of anything in my life to be honest – and it was worthwhile for them too. At one point, myself and my friend went to leave and were more or less hauled back in, forced to have another beer which tipped us over into the stage of ‘that was delicious, let’s get a 6-pack each for the road’. Anyway, back on topic… 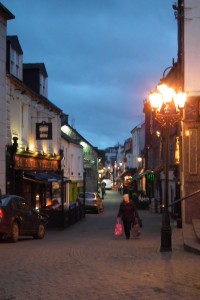 Smithwicks. It came with the almost compulsory free pint at the end, each one perfectly poured by our tour guide who then promptly disappeared for a bit. Of course, harking back to the Steam Whistle experience, I lingered around to see if a second pint might be on the cards but as most tourists left of their own accord, it looked highly unlikely and we eventually called it a late afternoon ourselves.

Back out into the cold February evening, my thirst for a pint had but only increased so we rounded off our trip with a delicious meal of bar food and, in my particular case, a ‘gathering’ of my own; a gathering of pints to round the evening off (which I can assure you did nothing for me trying to get the car out of the aforementioned ultra-compact car park the next morning).

Next time round, I’ll let you know how our trip to the sunny South-West went down, and how to try and reach road-worthy speeds in a Peugeot 206 with 4 people plus all their luggage. It was interesting…