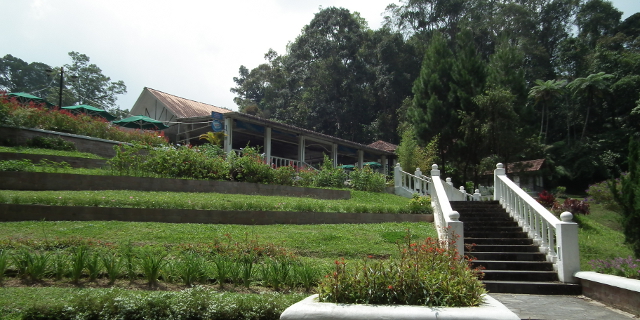 After recently telling friends how I wanted to visit the Cameron Highlands – a good few hours drive from KL – but feared that my car (which is something of an antique, if only all previous owners had preserved and treated it as such) may not actually make the journey, one suggestion kept being repeated; Fraser’s Hill.

Only an hour and a half from KL, I was told, and so lovely you wouldn’t imagine – just like an English village! My experience to date with supposed ‘English’ villages anywhere outside of England hasn’t been good, but with the Hari Raya celebrations giving us all a delicious 4-day weekend and thought of cooler weather filling me with undeniable enthusiasm, it seemed only right to try and see if ‘The Beast’ (yes, the car has assumed a name) was capable of making the journey. The answer – yes, it was, another notch in the belt for my beleaguered Proton Wira, though just about.

While the first hour of the journey from KL passed relatively unremarkably, the last 50 minutes or so – and this will apply to anyone, not just anyone driving a Proton Wira – is a twisting, turning roller coaster of hills, dips, turns and double-backs within the footprint of the car, that will likely leave the driver shaking uncontrollably and showering in their clothes for days afterwards. Perhaps a bit dramatic, but no joke, my hands and ‘braking foot’ are actually aching as I type. It feels like it’s never going to end and when we finally took the last hill up into the village, it almost seemed like an oasis in the desert…that perhaps we might be imagining.

I know many of my long-time readers will be wondering why all the enthusiasm and what happened to the grumpiness of times past. Let me hit you with something for that right now, here was the scene at this ‘quiet, peaceful hillside retreat’ as we rolled into town…

Guess who had the same idea? Everyone! Honestly, it was pretty packed. We eventually got parked and walked back into town. What about the weather? I won’t lie to you, knowing how bad the haze is in the Klang Valley right now, the air quality up at Fraser’s Hill was beyond belief – like Ireland on a hot summer’s day, so basically like Malaysia if it ever eventually freezes over. Beautiful breeze (the things you miss!), cool air, trees of all kind of shades of green. Leeches apparently, in the plenty also, though in my case I more or less got out of the car smelling like a product endorsement for ‘Off’, the local mosquito and insect repellent so I knew nothing of them for the afternoon.

Walking back down into the village, you come quickly to the centrepiece – a clock tower that also performs wonderfully as a makeshift roundabout. For the Irish out there, it’s a little bit like Enniskerry only much smaller and without the outsize plastic ice cream cones outside the front doors of the shops’.

The clock tower lets you know you’ve arrived, but the views you often catch in between trees or out across the neighbouring golf course let you know what the ridiculous journey up was all about as you peer out and realise how ridiculously high up you are and how everything else around you is definitely lower down. The weather is so much cooler than back in KL and sitting in the shade, you could easily be in a different country.

So what is there to do in Fraser’s Hill – well, we had to hit a snag somewhere and unfortunately this was kind of it. There’s a number of trails you can do if you like trekking, and the town is very nice to see, though you’ll find there isn’t much after a restaurant, two hotels, a police station, a post office and one or two other bits. According to the visitor information centre – rather, according to the poster beside the desk, as the staff sadly weren’t too pushed for a chat – there’s also boating, bird-watching if you enjoy that. Did I mention trekking already?

Honestly, it’s a beautiful place and a fantastic escape from the heavy, humid climate further down, but make no mistake – there’s not actually a whole lot to do. If, like me, you can often see tourist attractions in 20 minutes where others can somehow labour over them for a day, then you’ll probably be ready to wrap up within 40 minutes (only you won’t, because you’ll remember how long the drive up just took, so you’ll try and stretch it out a bit just to put off having to go back down).

Before long, we returned back to the car and started our roller coaster journey back down all over again.

Would I go back or visit Fraser’s Hill again? Not especially, no, unless there was a very compelling reason. Don't get me wrong, when you’re coming to visit Malaysia and you enjoy hiking, trekking, bird-watching or getting out of the Malaysian heat, then this is a definite potential stop on anyone’s itinerary. But make no mistake, there’s only so much you can do here once you’ve had your fill of fresh air and outstanding scenery.