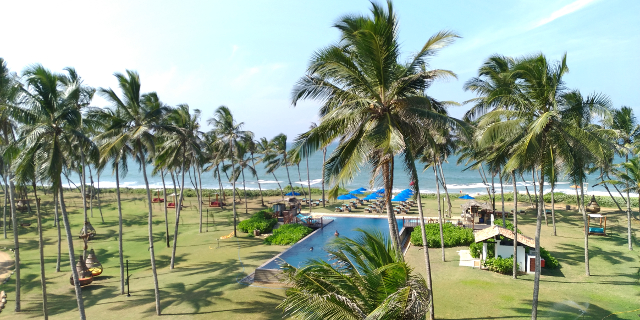 As you know from my previous post, I found myself unexpected on the way, for my 30th birthday, to Shangri-La’s Hambantota Resort & Spa, in the far south of Sri Lanka.

First of all, before anyone writes me in time to come suggesting I didn’t tell them; as it stands, it’s a long drive from the airport. I’d had a very long week at work though and was more than happy to talk to the driver for about an hour, before falling fast asleep for the remainder of the journey. It is about 4 hours though, even at this late stage of the evening.

We arrived somewhere around 3am and I’ll be honest, arriving to a property like this at night just doesn’t do the place the justice it deserves. The smell of the sea air, the cool breeze, the sound of the waves crashing (these waves weren’t lapping, that’s for sure!) – it was all so beautiful and yet, the arrival time did nothing for me other than make me think it was some kind of weird dream. 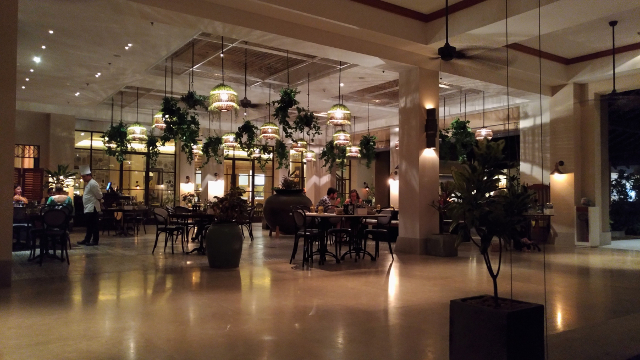 Our room was a sea-view room and while the view out over the golf course and surrounds looks lovely, I feel like if you put in the money for a room at this resort at all, the extra for a sea view should be almost compulsory. 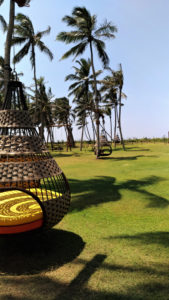 Next morning, I encountered the traditional Shangri-La ‘trade-off’; stay in the super comfy bed, or get up and eat so much breakfast I always feel mildly unwell for a few hours afterwards before waddling to the pool. But the view (see the cover photo above) really couldn’t be argued with and so it was off to the breakfast buffet for the inevitable monstrous breakfast.

The setting and surroundings of this property, more so even than my other favourites at Rasa Sayang and Rasa Ria, are fantastically natural and peaceful. While Rasa Sayang suffers somewhat from being hemmed in by all the neighbouring hotels, and Rasa Ria is almost awkwardly alone with a beach that seems more designed for an aircraft landing, Hambantota has it all in this regard – along with plenty of loungers, areas to wander, nature and of course, beautiful hanging daybeds.

Somehow too, there appeared to be no place or part of the day when things looked worse or less picturesque. During the early evening, we took a stroll around the grounds and even then, it was still all looking like…well…have a look. 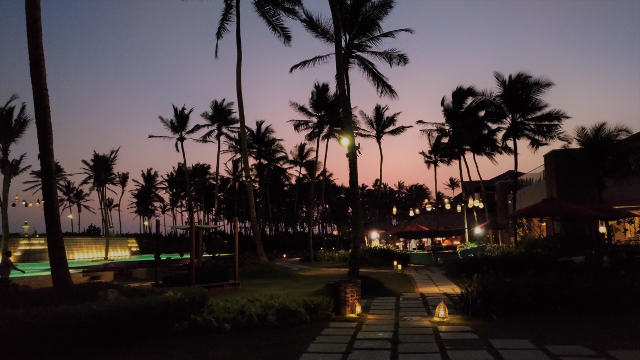 One criticism though unfortunately came to us that very evening though – it appeared the ‘breakfast’ restaurant (excuse my forgetfulness, I can’t remember the name) was having some seafood buffet and we had a booking the next evening for my birthday at the other restaurant, Sera. So we headed for the bar upstairs, which only did mostly snacks, then to the golf bar, Ulpatha (which by the way, does some fantastic food far beyond my expectations – and I only wished the range, flavour and offerings could be matched at the poolside, where we had a minivan serving baguettes, which while nice, got a bit tiresome after a few days), which was also not doing food due to the seafood buffet. 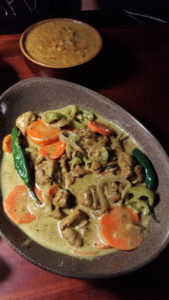 But every cloud has a silver lining as you know, so I ordered room service – and you know what, it was absolutely fantastic. I worried slightly when the guy brought it all up on a wooden tray, which appeared impossible to carry let alone maintain any heat, but wow, I could actually have gone for room service every night thereafter. It’s a shame it took a seafood buffet and a lack of other options to bring us to this point, but was I delighted.

I could basically summarise this entire stay now by just saying ‘wonderful’, but I’ll move on by saying my trip to Chi, The Spa was similarly epic, and the beef rendang prepared by the Indonesian chef at Sera the next evening was spectacular (as was the chocolate birthday cake).

So what to criticise? Well you know it’s always so hard (though it has to be done too) to fault or give feedback on Shangri-La brand properties – I like them purely for the consistency and focus on service delivery they have globally. In the case of breakfast though – and this seemed to be a theme across this particular property at all times actually – service levels are still a little patchy. First morning there was no welcome really until we wandered in looking lost, another morning the coffee/tea came so late we were nearly finished (though the poor woman had served us the previous night which suggested their shifts are pretty aggressive), while another day we came back around 4pm to find the room still not serviced.

Similarly, if you’re reading this at Shangri-La HQ, please do away with the awful music at the pool nearby the breakfast area, it’s so awful and hard to relax with. Finally, and as it’s a new property, a suggestion would be to please expand the offerings (and speed of service) at the minivan pool area. It was basically baguettes and served so super slowly that on the last day it took 40 minutes, leaving us 20 minutes to eat, settle our bill and check-out.

But with the exception of the food trucks, the staff/service issues I have every confidence will fix themselves and what does that leave us, but one of the most stunning Shangri-La properties they have in their collection, an absolutely amazing place to spend a 30th birthday and a place I can only hope I have the chance to return to again soon. 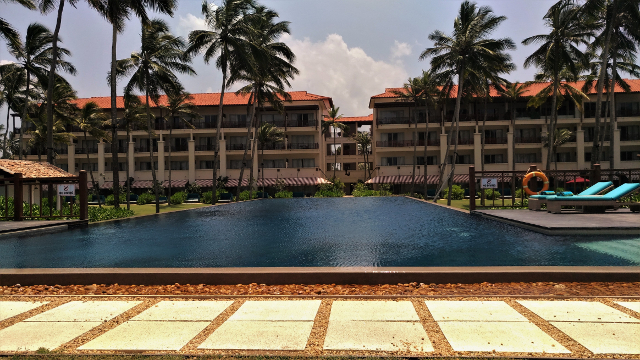