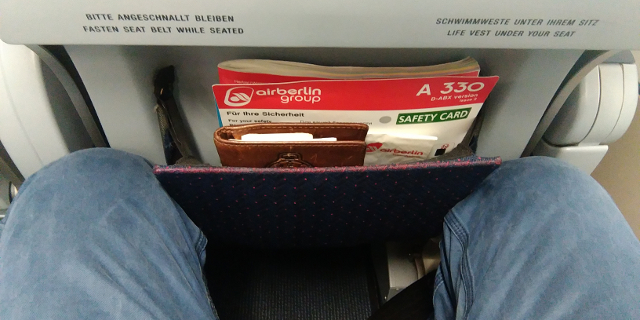 For our return back to Kuala Lumpur, our ticket introduced us to one of Etihad’s “partners”, Air Berlin. Honestly, I’ve never flown with nor known much even about Air Berlin, always considering it as a sort of hybrid low-cost best left to the Germans to figure out.

The flight was boarded seriously on time and we had a seat literally one behind the exit row. First impressions weren’t exactly marvellous to be honest and I don’t know if this is Etihad’s brightest move; not so much for people like myself who are flying primarily on cost and secondarily on comfort, but the premium and business markets. The whole experience reminded me of a sort of ‘Fun Low-Cost Lufthansa’ if such a thing could ever exist. 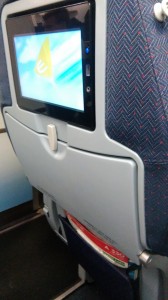 First things first; despite all the myriad Etihad Airways branding and tie-up video shown on boarding, the amenities are decidedly not Etihad and it was back to the old pillow style, poorer-quality headphones and what felt like tremendously large bulky seats and little legroom. As I say, it was OK for me and I realised in advance this was going to be the case, but if I booked and paid a full-fare Etihad Business fare, I probably wouldn’t have been so impressed.

Now, Air Berlin’s safety video needs a special mention; I don’t know if it’s deliberate or what, but it’s so old-school and so retro, it made me feel like flying long-haul once again back in the early 90’s – just with individual screens instead of the old overhead drop-down screens!

The service got going more or less as soon as we got in the air and, again, it was slightly surreal; our cabin crew, while a very efficient and friendly fella, kept trying to make some kind of joke with me which I just didn’t really appreciate, example (one of many, unfortunately); I asked for a water and the response was “In that case you could have drunk from the bathroom sink”. Yeah listen, it’s late at night and the beginning of a long journey, just give me the water. 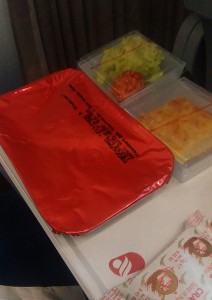 To give him credit though, compared with proper Etihad, he seemed to be the sole crew manning our whole section of the plane and he did manage it with reckless abandon. The meal was again, “fine”, but a definite step down from Etihad Airways itself and the presentation was more like the usual airline style of “here’s a mystery tin foil packet of heavily processed food to keep you alive just up until the end of this flight” rather than Etihad’s catering, which I am always ready to compliment. OK, but nothing to choose the airline over again in future.

There was also no in-flight WiFi – which I would think should be a priority to install to at least standardise something across the partners – but to be honest, despite writing off their entertainment system at the start, this was one thing that was very positively surprising. It was actually very good – hats off to you Air Berlin, the entertainment system had lots of content, my usual test of the dance playlist gave very good results and as is my ultimate test, it was so good, I actually managed to sleep to the dance playlist for a couple of hours – which always impresses me greatly. Also, if this is of importance to anyone out there, the screens are properly sensitive so you don’t have to nearly break a finger choosing the options. 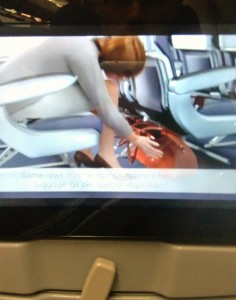 After only a couple of hours, it was wakey-wakey time and out came our Master of Efficiency once again. Again, the breakfast/snack was a bit disappointing to be honest; come on guys, a lot of people are just transiting in Abu Dhabi and need to be filled for a few more hours, a pack of cookies (though they were lovely cookies – I can’t remember the brand) is a little bit too light. I decided to go for the orange juice this time so as not to get a cheeky comment. To be fair, the guy was friendly – perhaps just a bit too much ‘fun’ considering the time of day and my strong desire to just sleep.

Finally, it was time to touchdown and we came back down to earth spot on time as you would expect from a German airline more than any other and after a ridiculously long taxi, we reached our gate!

So how about Air Berlin? Honestly, yes I’d take them again knowing fully what to expect and paying for the ticket at a reasonably low-fare price – but I do think they run quite a non-comparable service to their main ‘partner’ Etihad and I don’t know how happy I’d be if I got more than one flight in a round-trip sequence with them rather than Etihad itself. I think it’s a bit of a risk on Etihad to be selling itineraries like this that can sometimes include Jet Airways, Air Berlin, Air Serbia etc. and maybe only one flight on mainline Etihad; because they’re just not all standardised and the product isn’t consistent.

But as for Air Berlin, yes, I’d do it, as I said above, again – and hopefully next time have a set of jokes at the ready for the crew myself!