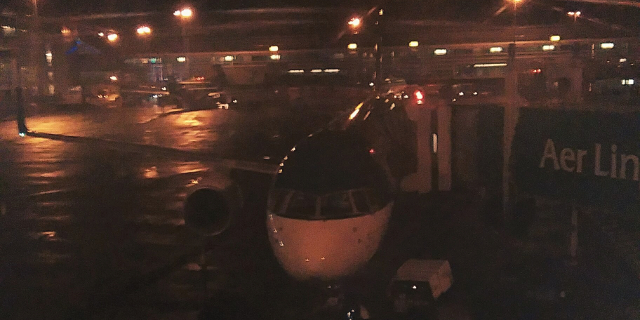 As long-time readers of the blog will remember, by virtue of being my former national carrier (before moving to Malaysia), I have a long and stretching history of travel with Aer Lingus, from the point when they wanted to be a cheap no-frills carrier (the black days, as I like to call them) through to the current and far, far more pleasant middle-ground. I was even a fully-fledged member of the Gold Circle for a couple of years, so with a trip needed between Dublin and Dusseldorf (you may remember I used Germanwings for this the previous year, in 2014) it seemed only right and proper order to give the national carrier and former favourite a spin.

First up, Aer Lingus’ website has improved ever so dramatically and it is now firmly in the 21st century. Not that the old one was dysfunctional or unimpressive – just old, and it seemed to have been around, honestly, since forever. Check-in is available up to 30 days beforehand, so I went ahead and checked-in as soon as I could. Emergency/extra legroom seating can be had for a not unattractive fee, and I really can’t advocate these options enough. The legroom throughout isn’t hideous, but the chances are also very good (as they used to be back in the day) that you might get most or all of the extra legroom row to yourself if you pay extra, since so few others do. 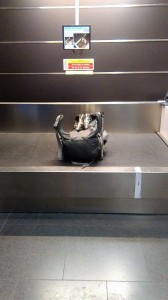 Onto check-in. The flight was the bright and early morning of the 28th December and now, stripped of any kind of elite status, I had to queue up like a normal passenger. There’s one queue for all online passengers and compared with the dreadful effort of Malaysia Airlines, this one moves at warp speed and helpfully, there was someone at the top of the queue practically pushing us to the next empty counter as soon as one became free. The check-in agent I got couldn’t have been friendlier (Oh, Aer Lingus, please never lose your uniform friendliness…) and due to my backpack, I was sent off over to the Oversize Luggage Drop.

OK, here we go; the next two bits aren’t great. Numero Uno, the oversize luggage guy (he appeared to belong to Aer Lingus, but this could also be a Dublin Airport issue) had wandered off with no chance of returning. I stood for a while, then some more people came behind me. Seriously guys, it’s the freaking 28th of December, right after Christmas, people are bound to need to check-in some oversize baggage at some point. There was literally NO sign of the guy returning. It took until we all started getting a bit peeved, and me having to accost the neighbouring Premier Lane check-in agent before she finally got on the phone (not showing any obvious initiative in spite of the growing queue until I confronted her) and located him. 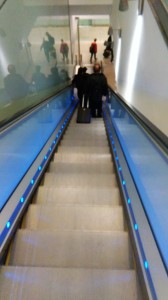 Second problem – by virtue of Terminal 2’s limited size, it is simply not possible for all Aer Lingus-operated flights to leave from T2 in the morning rush. Dusseldorf, even back in the day, was/is ALWAYS one that gets pulled to be from the far older and less impressive Terminal 1. However, for some reason, staff appear not to ever admit or acknowledge this or just tell you ‘sorry, the flight’ll be out of T1’ instead preferring the ‘Oh…that’ll be a short walk’ line instead. As always, since Dublin Airport renamed their old ‘piers’, I had no idea where the gate would be until having gone down an escalator, around a few corners, a travellator or two, I suddenly recognised the dated old end of Terminal 1’s former Pier C. It’s simply a problem of Dublin Airport’s size, but it’s just so much more unimpressive to wind up back there in this draughty roundabout of a terminal that feels like a throwback to the 70’s (because it is).

Let’s pause for a moment of respect; MAJOR kudos to Dublin Airport for pricing the practical items like bottles of water at actual proper prices, not rip-off €2.50 like I came across in Dusseldorf and then also for utilising some kind of (bravely, it must be said) honour system to allow passengers in a rush just drop a shiny Euro in a box and take the water. Full disclosure; I used to work in Dublin Airport in duty-free and I can’t even begin to tell you how many queues were formed just over a few single passengers buying bottled water. So this is a seriously awesome idea and stands out from the other rip-off airports (wink wink all German airports, this song’s for you) across Europe. 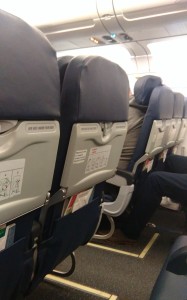 Say what you will about Aer Lingus but they just do warm hospitality and sincerity so well in a manner that makes (or should make) all Irish people proud. It makes me proud anyway. Unlike Turkish Airlines’ staff derisory snort on boarding, I had a full conversation about how Christmas had gone with the cabin crew at the door on this flight (and an actual interactive, meaningful conversation, not the staged, put-on interaction which readers will know I spot easily and loathe).

Down to the exit row and I plonked myself down at Row 13 (ended up being completely empty on my side other than myself) and as I say, the money is just so worth that rake of legroom. I’d pay it every time! There was a short introduction to the emergency exit hatch and the usual questions on whether I was comfortable assisting etc. (which of course I was, otherwise I wouldn’t have booked that row) and we were away a few minutes early.

Aer Lingus also differs as a national carrier on short-haul – although more legacy carriers are increasingly catching on to this – in that you have to pay for snacks and beverages. For a 1.5 hour flight like to Dusseldorf, it’s very discretionary I suppose and many people didn’t; the trolley seemed to be at my row within seconds, but as is nearly my custom at this stage, I went for the chicken & stuffing sandwich (again, long-time readers will laugh just reading this knowing of my almost legacy love for this particular item) and a cup of coffee. I know some baulk at paying for airline food, but Aer Lingus also do on-board catering extremely well; I’m sure the other items are equally just as nice, but it has to be said, the sandwich is always fresh and genuinely very tasty – I’d rather pay for something that good, than be lumbered with some horrible tinfoil crock of garbage like TK’s breakfasts. The coffee too came in some kind of odd cup that had a filter you could drink from at the top; perfect since I hate those silly lid flaps and usually end up taking the whole lid off! 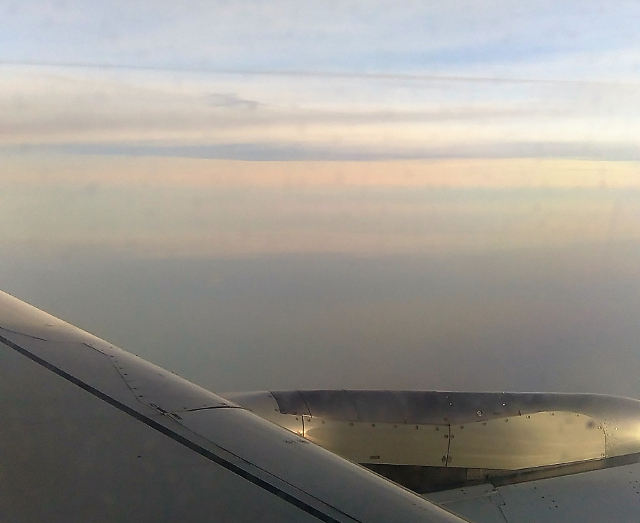 In no time at all after that, it was time for the approach and landing and I can’t comment much on this because – in spite of having my seat bolt-upright and the light turbulence on the approach – I actually fell flat out asleep, waking up only about 30 seconds from touchdown, completely oblivious to the rest of the entire approach!

Aer Lingus, it was a real pleasure and I hope it won’t be 2.5 years again until the next time!