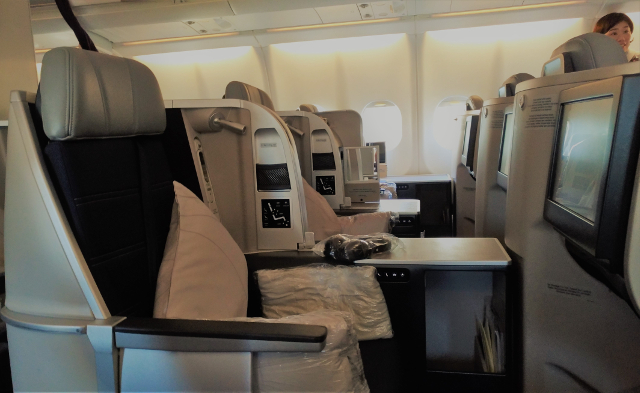 For the roughly 6-hour flight to Seoul and back, business class fares were uncharacteristically low and, spying an opportunity to not have to sit down the back for the overnighter, I jumped at the chance to trial Malaysia Airlines’ long-haul business class – while also having the prospect of a bit of a sleep.

On Malaysia Airlines’ 737’s, all boarding is done through the forward door and so, if you are a business class passenger who managed to board early, you end up with every other passenger having to pass you and probably stand in the aisle waiting; although, I’ve noticed this isn’t just limited to narrow short-haul flights, as British Airways’ palatial 787 has the same issue.

Thankfully for their longer-haul journeys on multi-aisle aircraft, there’s a boarding bridge for business directly, and one directly for economy. On boarding, I was shown to my seat and offered a choice of drinks – non-alcoholic – between pink guava juice, orange juice and water. As you all know, I accept the pink guava and nothing else! 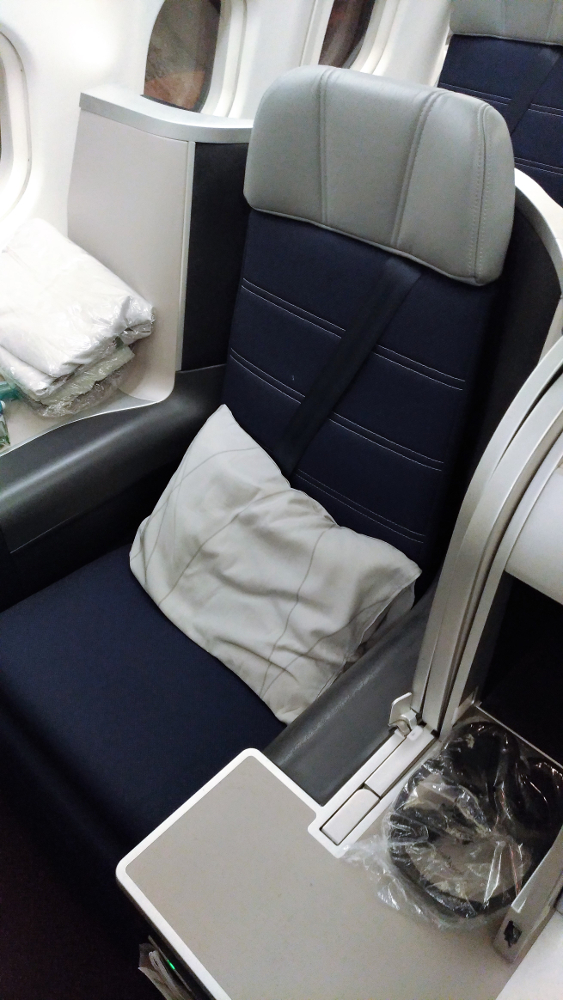 The seat – I was in seat 1K, the furthest right and one of the so-called ‘throne seats’, meaning the seat is almost hemmed in on both sides by ultra-large tables and counters, such that it becomes almost a fully private booth – was lovely. If I had to criticise anything, it would be that all seats generally weren’t very wide; I’m not a large person by any stretch, but I didn’t find it to be much wider by anything (if at all) than my more familiar premium economy seat. Likewise, a complaint not from me but from the row behind, where there was two seats was around the lack of at-seat storage in the alternating rows with 2 seats.

After take-off, meal service got going and on a flight this late, it turned out – even though I’d pre-ordered a lamb shank – that the primary meal was breakfast and that this would be only a snack of a satay plate. Needless to say, I ended up having second-helpings (as suggested) and had zero room for the lamb, which had to be postponed until breakfast the next morning, oddly. 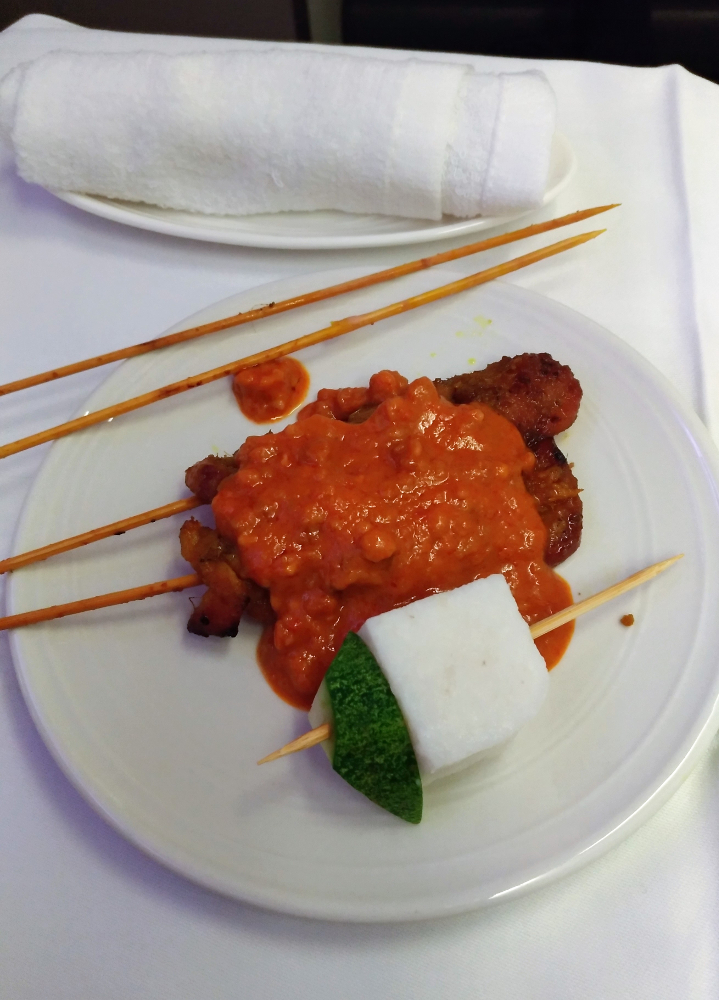 With that, it was time to test out the bed mode; OK, so I went slightly wrong here. I made my bed, climbed in and to be honest, this review would’ve been terrible about the sleep quality owing to the shoulder-type seatbelt, which kept cutting into my neck. As it turned out, I wasn’t aware and nor did any member of crew tell me until the return journey, that this only needs to be latched for take-off and landing and can otherwise be hooked off from the main lap belt. Nightmare! So, I ended up trying to sleep all night with this horrible shoulder belt cutting into me.

If I ignore all that though, the bedding was perfectly fine and the temperature was suitable enough to catch 40 winks. Unfortunately our journey was particularly turbulent however and there wasn’t much time for fully uninterrupted sleeping. 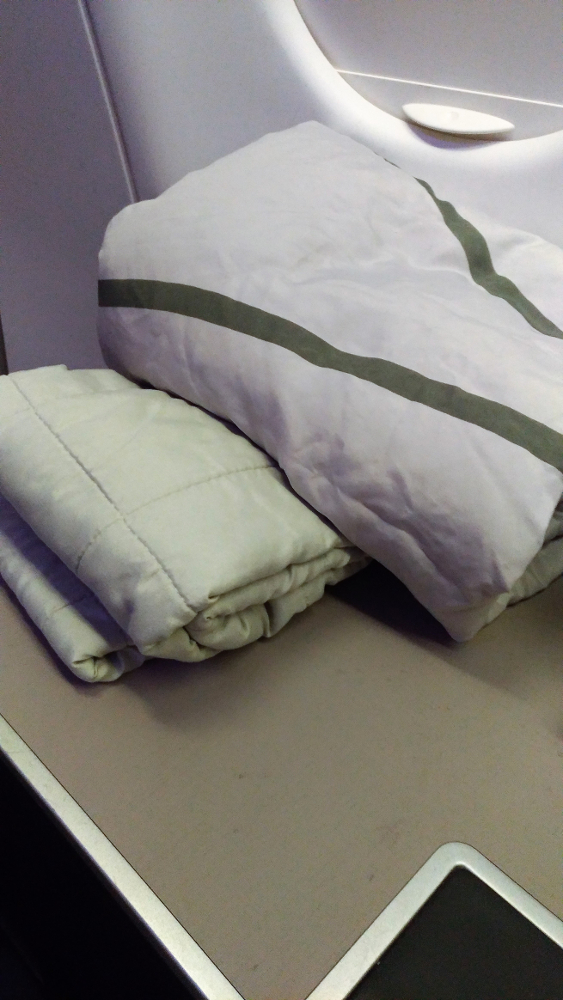 Before long the lights were turned back up full blast in time for a scandalously-early breakfast at which point – yes – out came my ill-timed lamb shank! Nevertheless, in spite of the poor timing, I wasn’t going to let the opportunity pass and went ahead and ate it regardless (it was very good). This huge issue with the poor timing panned out much better on the return leg, which leaves Seoul around late morning and arrives to KL late afternoon; a flight time which certainly gives rise to a more grandiose meal such as my beef tenderloin that I had pre-ordered, washed down with heaps of wine.

Speaking of the return journey, this also found me in another throne seat but much further back from the galley around 4K. To be honest, even though people moan about the ‘foot space’ in the little cubbyhole, I found it perfectly fine despite being a very tall guy and actually almost preferred the seat purely by virtue of its distance from the galley through the day and the resulting silence. 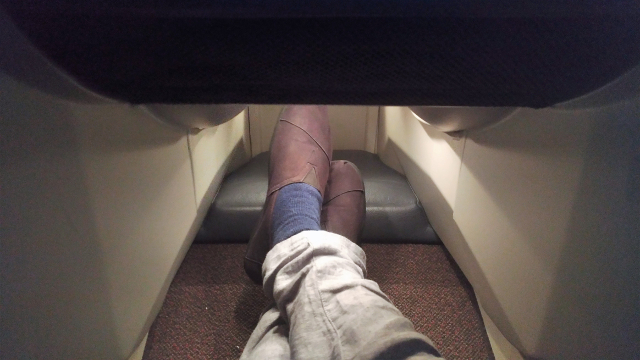 Shoving that all aside however, would I say that Malaysia’s business product on long-haul is anything mind-blowing? No, not especially and I would actually go so far as to say that I think I prefer British Airways’ antiquated product for the simple reason of the elegance, maintenance and foot-space of the cabin; Malaysia Airlines’ was fine but as is often the case, for such a new product, the cabin was already heavily showing its age and a lack of ‘touch-ups’ and attention to detail to the seats, with had scuff marks and little nicks and rips here and there.

However, as usual, with the minor gripe that nobody on the way out bothered showing me that I didn’t actually need to keep the seatbelt shoulder harness done up through the night, it was the service that keeps Malaysia Airlines’ truly flying high, and would have me coming back again rather than the actual hard product, which unfortunately is always average, but not great.