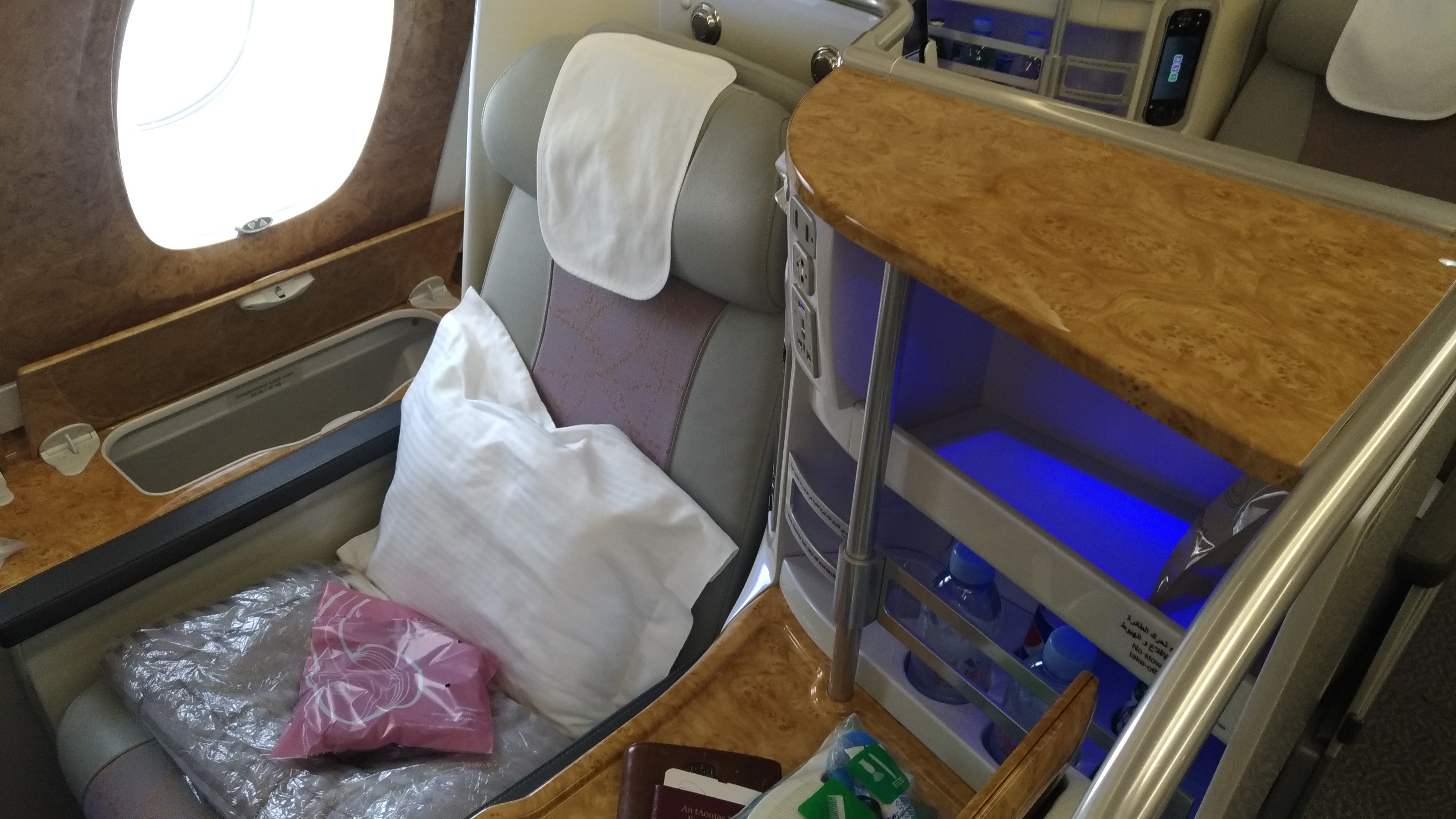 With one of the most last-minute, 3-week long travel extravaganzas of my life suddenly hurtling at me, I was delighted to finally have a chance to try Emirates Business Class on an epic journey all the way from Kuala Lumpur, through Dubai, and on to Sao Paulo – on an all-A380 routing, which I consider to have their nicest version of business class (considering the unforgivable 2-3-2 layout I found myself subjected to last year, on the way down to Brisbane). So, was it all that or is it true that they’re the best marketers in the world and not much else?

Emirates’ lounge in Kuala Lumpur airport is their own, and while I found it pretty compact and having something of an odd layout, it is nice that they were able to do it in their own, very much over-the-top style. Even though the ridiculous wood paneling is not especially to my taste, it is nice to feel that you’ve already ‘started’ your journey with the airline – and not sit in some hideous subcontracted lounge, eating vastly sub-par food.

Onto the plane itself, and Emirates’ A380 is something to behold. The business class cabin has been described as ‘dormitory-like’ and to be honest, I couldn’t agree more on this point. I sat in two different seats on this journey; one on the inside middle of the aircraft, very close to my neighbor, and the other in the highly coveted ‘K’ position, tucked in against the window with my warm minibar and table counter backing onto the aisle. Both seats were fine, although I would suggest that the seat fabric on both flights is not wearing especially well, and showing some clear signs of discoloration. In addition, my seat both times appeared to lack the requisite power to fold upright while I was in any way still applying pressure or laying back. But as seats go, I had some fantastic sleeps throughout my ultra-long journey, and of course I would recommend either A/K to be nicely tucked in by the window.

Service however was not especially fantastic and this was the point I mostly came away slightly bitter about from the journey. On the first flight, lights were turned out almost as soon as possible and no food or drinks were readily offered; in the end, I managed to stop the absolutely hilarious(!) cabin crew to ask for a glass of champagne (since none was offered during pre-departure) who sarcastically replied “no” and then got it anyway. When I asked about food, they mentioned there were light bites on demand but that you’d also be able to get them at the bar – which by far, seemed to be the crews preference as nobody was dying to take an order or bring me any food. Down at the bar meanwhile, there were either cheese sticks or some pre-packed sandwiches. Hardly haute cuisine.

In comparison to the second flight though, service on the first was magnificent. The second offered champagne immediately on the ground thankfully, along with a slightly more reasonable food offering post-departure of breakfast with some of the best scrambled eggs I’ve ever had on a plane. However once again, asking for a re-fill seemed to represent some kind of major chore for the crew. Likewise, compared to my flight last year to Brisbane, there was no pro-active offer to make the bed with the provided mattress pad on either flight; rather it was just handed out. In addition, this flight saw crew almost insist everyone order their half-way lunch at pre-departure.

One of my key take-aways from service and interactions on both these flights was that the bar most actively served the whims of the crew, who seemed to feel that re-fills and snacks could be gotten from the bar and thus they were not required to, nor should they, pro-actively offer seated passengers in the cabin any snacks or drinks beyond the prescribed meal service times. Similarly, that the provision of little red smartphones for the crew did not enable them to provide any level of more personalized service, but rather as a method for taking orders as early as possible and not needing to really interact or meaningfully engage with passengers.

Onto the food – what I got of it. As I say, the first flight was sorely lacking as apparently it was better to eat from the bar at the back, which had pre-packed sandwiches – followed the next morning by what was a very reasonable breakfast, but served unfathomably early, about 2 hours before landing. Onto the next flight, the food service commenced once again with another breakfast, followed by a lunch about halfway through the flight to Sao Paulo. The breakfast was once again quite respectable, but I really was saving myself up for an amazing lunch; and this turned out to be pretty disappointing. The lady with the ‘cage’ of white wine passed around twice during the whole service and I had to request someone to get her to do another round (she did tell me that white wasn’t popular on that flight, although that doesn’t really do much for me, since it was popular at my seat at least).

The chicken dish itself meanwhile, was tasty but more like a microwave meal (both in taste and look) than something befitting a 35K Malaysian Ringgit ticket.

Lastly, we come to entertainment – one word; ‘restart’. Both flights my in-flight entertainment system had to be restarted; one the first it was unresponsive, while on the second it refused to turn off no matter how or where you tried to power the screen down – it would pop back on by itself about 5 seconds later. Truthfully, I didn’t actually use the system other than using the moving map; so you can imagine how grating it was to have to get the system restarted twice on different flights when it wasn’t really being taxed in any way by my usage.

Overall, in spite of its age and wear, I was a huge fan of the Emirates A380 business class seat, their home business class lounge and with the “idea” of the service and the bar. In truth, the bar was gamed by the crew who used it as effectively a self-service counter for passengers that they don’t need to put in any additional effort outside service times, the entertainment system seemed like it had seen better days – for me at least, although I’m sure others have completely trouble-free journeys – and topped off by a most unenthusiastic set of crew who really seemed like they were there to pass time rather than take pride in their actual salaried role.

So, where do we go from here? I want to love Emirates – everyone else seems to – and we still have a return journey to go, so I’m hoping in a few weeks I’ll be eating my words and they will seem like a very plausible option home to Dublin from KL for my trips; although on the other side I am considering using Skywards miles to upgrade to first class on at least one of the segments, to see if we fare any better there.

Let me know what you think of Emirates business class and whether you’ve had any of these issues before, and if upgrading to first class is something not to be missed?